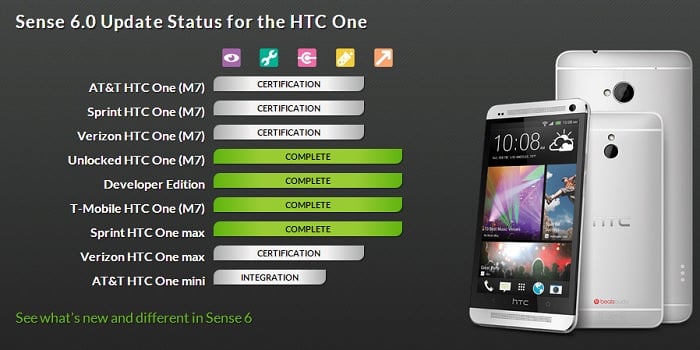 Earlier this month, HTC started rolling out the latest Sense 6.0 update for HTC One Max for Sprint, but it seems the turn of HTC One M7 has arrived.

Reports suggest a few versions of the HTC One M7 are getting the latest Sense 6.0 update, including the T-Mobile version as well as the Unlocked and developer edition models.

The change about the update roll out is also on the HTC Software update page, which marks the roll out as “complete” for the above mentioned models of the HTC One M7.

The latest Sense 6.0 brings most of the software improvements introduced with the HTC One M7, and brings improved Blinkfeed, video highlights and a couple of improvements. However, don’t expect it to be exactly the same as the HTC One M8, since it doesn’t come with all the features due to hardware limitations, but it will boost its performance for sure.

The latest update brings a handful of improvements nonetheless, and also introduces the extreme power saving mode for the device, which can provide users with an extended battery timing.

The update is sized at almost 667MB so make sure you are connected to a WiFi connection before you download the update, and make sure you don’t choke out your mobile data limit.