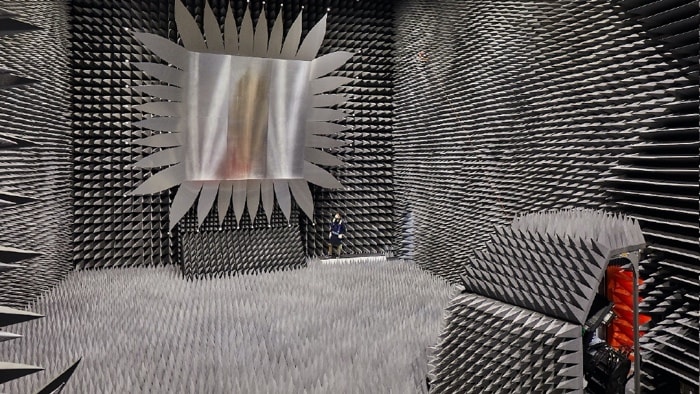 If you have ever wondered how 5G technology is developed, Samsung has released a new video showing how it tests out its 5G in an Anechoic Chamber.

The video below shows us how Samsung uses an Anechoic Chamber to test out its new 5G radios before they are launched, more details are below.

The term “anechoic” comes from “an-echoic”, meaning non-echoing or non-reflective in Greek. As its name suggests, this room can emulate a non-reflective environment by using special walls and ceiling and floor designs to completely absorb all reflected electromagnetic waves. This is extremely important since even a small electromagnetic wave can disrupt an accurate antenna measurement. The interior walls are built with a number of absorbers that have a pyramid shape and help to minimize interference in the shielded room. This concept is very similar to how a stealth aircraft evades radar detection by absorbing and scattering radar signals.

The chamber’s interior is also equipped with a parabolic reflector. This reflector is used to collect radio waves from a generator and re-project the waves to the 5G radios placed inside the chamber. By collecting and re-projecting the waves at different angles, the parabolic reflector can simulate long distances, making it seem as though the 5G radio were transmitting radio waves to a mobile device from a far-off location. While the size of the chamber is relative to the simulated distance, Samsung’s chambers can simulate a distance of as much as hundreds of kilometers, creating what is called a “far field condition”. To measure the accuracy of radio performance, the size of the chamber is critical.

You can find out more information about Samsung’s latest 5G technology and how it is tested out over ay their website at the link below.