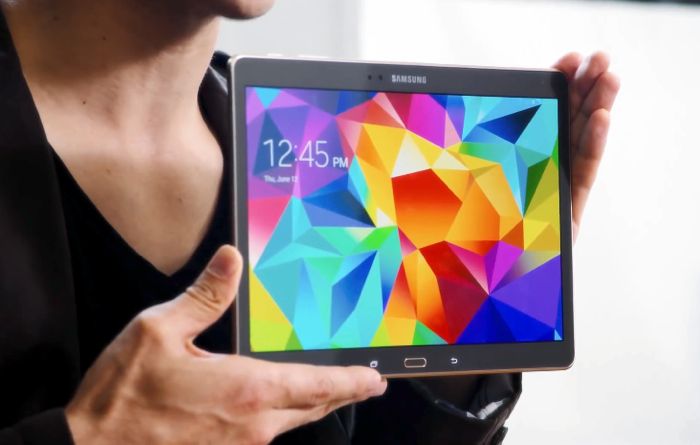 Last week Samsung announced their new Samsung Galaxy Tab S tablets, there are two version of the device available, one with an 8.4 inch display, the other with a 10.5 inch display.

Both of these new Android tablets are equipped with a Super AMOLED display that feature a QHD resolution of 2560 x 1400 pixels, and now Samsung has released an official hands on video for the new Galaxy Tab S tablets.

The video below gives us a good look at the new Samsung Galaxy Tab S, including the design of the device, and also some of the tablets features.

These new Android tablets come with the same specifications, which include a choice of processors depending on the model, these include a quad core Qualcomm Snapdragon 800 processor and an 8 core Samsung Exynos 5420 1.9GHz plus 1.3GHz processor.

Other specifications include 16GB or 32GB of included storage, 3GB of RAM and a microSD card slot which supports up to 128GB of extra storage.

The Samsung Galaxy Tab S also comes with an 8 megapixel rear camera and a front facing 2.1 megapixel camera, you can also choose from a WiFi only, or a WiFi and 4G LTE version of each tablet.