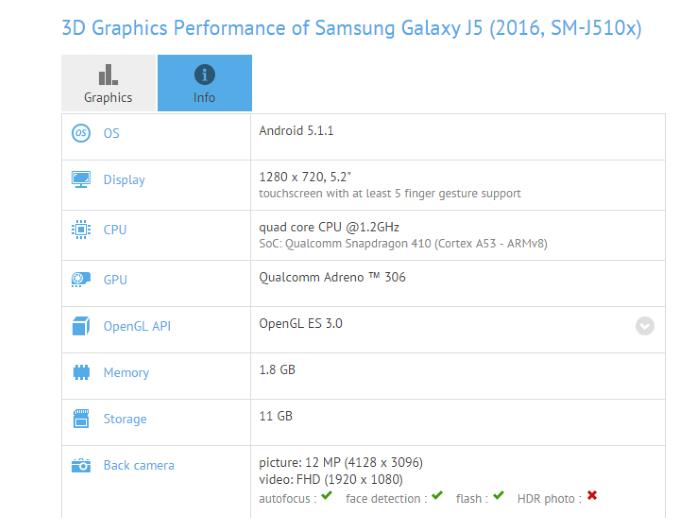 It has been a few months since Samsung released the mid-range Galaxy J5 handset. However, it seems the company is already working on its successor which may see the light of the day in the coming weeks.

Recently, the alleged Samsung Galaxy J5 (2016)with model number SM-J510x was spotted on GFXBench. The listing also revealed some of the specifications the alleged device is expected to bring at the table.

There’s a 5.2-inch display sporting a resolution of 1280 by 720 pixels and Android 5.1.1 Lollipop as the operating system. Under the hood, there’s a Qualcomm Snapdragon 810 processor paired with 2GB of RAM and 16GB of internal storage — the Galaxy J5 (2015) ships with 1.5GB of RAM so there’s a definite improvement here.

Other notable features includes a 13MP main camera for photos and videos as well as a 5MP front-facing camera for selfies.

There’s no word from Samsung about the existence of any such device, but most of the time, the handsets do make it to the market after they are spotted on benchmarking  websites. We’ll update you as soon as the company officially introduces the alleged Galaxy J5 (2016).