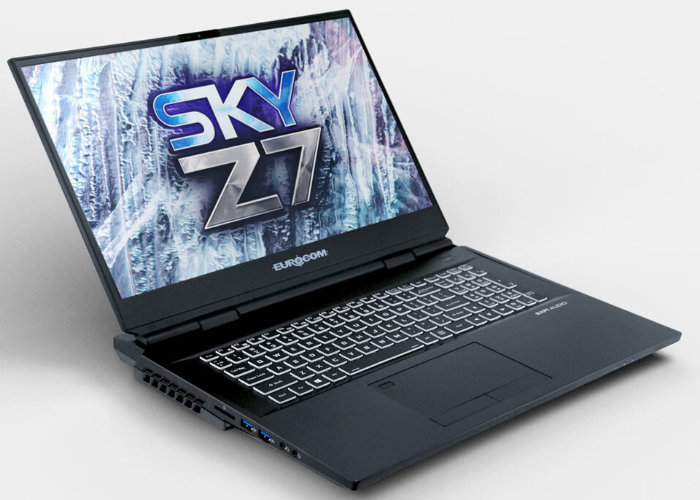 Eurocom has this week unveiled a new addition to their range of powerful laptops in the form of the EUROCOM Sky Z7 R2, based on the Intel Z590 Express chipset, as well as featuring the arrival of the long awaited and most powerful NVIDIA GeForce RTX GPUs. Eurocom’s Sky Z7 R2 is one of the few laptops that utilizes modular GPU technology based on the MXM 3.1 version 2.0 socket technology.

Providing a RTX GPU that is fully upgradeable and can be replaced at any time. The Eurocom “Mobile Supercomputer” is specifically designed with fully-upgradeable components featuring upgradeable, non-MaxQ GPU (via MXM 3.1 v2.0 technology) and desktop level CPU (via LGA 1200 socket), with easy-to-access and fully-upgradeable internal hardware, battery and external power if needed.

“Powered by NVIDIA’s newest RTX graphics (up to the Geforce RTX 3080), the EUROCOM Sky Z7 R2 delivers the ultra-performance that power users crave. It’s built with enhanced processing cores that delivers twice the performance as its previous generation counterpart.

Whether power users want to play the most graphics-heavy games today in maximum resolution and framerate, livestreaming in the highest image quality with the best encoding, or editing and rendering complex 3D scenes, the EUROCOM Sky Z7 R2 provides power users the performance needed to create and play in the highest quality possible.

Seamless and stutter-free 4K gaming at 60 FPS, as well as 8K video editing, rendering and gaming. The EUROCOM Sky Z7 R2 gives power users the performance headroom to crank up graphics settings and resolutions to the maximum in order to deliver an incredible visual experience.”