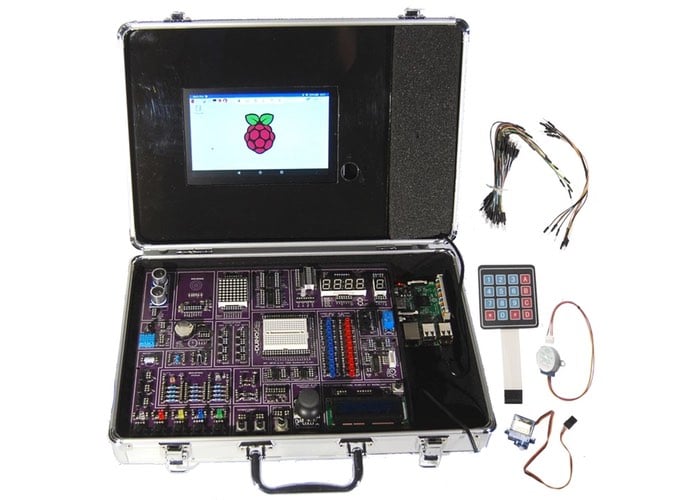 You might be interested in this new suitcase packed full of hardware and components that can be used to create a variety of different Pi projects to suit any ability and skill level.

Created by Dan Alich the suitcase of Raspberry Pi goodies also known as the RPiKit has been specifically created to learn what the Raspberry Pi GPIO pins can be used for and offers a variety of projects that can be built using the Pi mini PC, which is now in its third generation and has a wife variety of add-ons available. The creator of the PRiKit explains more :

While developing the prototyping system for the Arduino, I had many conversations with individuals looking to learn how the Raspberry Pi could be utilized and help learn electronics using Python and Java as a programming language. Most of my conversations ended up with the differences micro-controllers and micro-computers. After a couple years of thought and development, we have merged the two ideas. Yes, now you will know what to do with those bizarre “pins” on the corner of the Pi. Believe it or not, The Raspberry Pi is much more than a Bit Coin miner or a MineCraft server.

We have partnered with a parts kit supplier and turned this into a circuit board based “plug and play” kit without soldering, to help make learning easier and more accessible to users. All the components will also be available separately if you want to solder together a project and build it outside the RPi prototyping kit.

Our standard RPiKit will include a 7″ Andriod table that will be connected as a wireless display. You can also use your existing device (Tablet, iPad or WiFi computer) as a display if you wish or utilize the HDMI connection for a wired display for programming and testing. One of our Pledge levels offers the PRiKit without the wireless display.

For more information on the new RPiKit  tutorial suitcase jump over to the Kickstarter website where it is now available to back via the link below. If you found this article interesting you might also be interested in this list of awesome Raspberry Pi Zero projects we have put together, or Raspberry Pi displays.