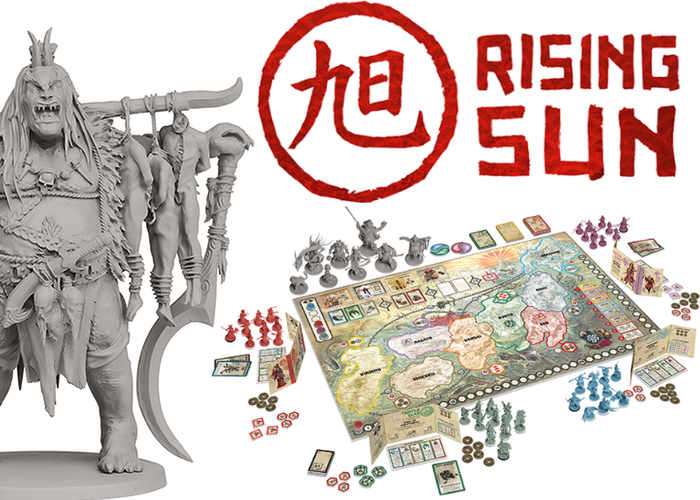 Board game developers Cool Mini Or Not have created yet another hit sensation on Kickstarter with the launch of their latest board game in the form of Rising Sun which has almost raised $2 million thanks to nearly 20,000 backers with still 21 days remaining on its campaign.

The latest board game from the team provides a tabletop experience during which Clans must use politics, strength and honor to rule the land, using amazing miniatures set in legendary feudal Japan.

Watch the video below to learn more about the new Rising Sun board game which has taken Kickstarter by storm and is set to start shipping out to backers during April 2018. CMON explain a little more about what you can expect from their latest creation :

Rising Sun is a board game for 3 to 5 players set in legendary feudal Japan. As the Kami descend from the heavens to reshape the land in their image, it is up to each player to lead their clan to victory. Use politics to further your cause, negotiate to seek the most profitable alliances, worship the Kami to gain their favor, recruit monsters out of legend to bolster your forces, and use your resources wisely to be victorious in battle.

Each of the five clans in Rising Sun brings not only their own individual set of ten beautifully detailed miniatures for their Daimyo, Shinto and Bushi units, but also a unique ability that sets them apart from the others and affects all players’ strategies.

-Koi (Flow, Like Water) – Ever adaptable, the Koi clan is able to use hired Ronin as coins and vice versa, giving them great flexibility and making their decisions very unpredictable.

-Dragonfly (Wings, Wind and Spirit) – Flying on gossamer wings, the Dragonfly clan is able to move anywhere on the map without restriction. You never know where they’ll strike next.

-Bonsai (Humility, Earth and Root) – Ever growing and evergreen, the Bonsai clan needs to spend no coins when buying resources. Strongholds sprout from the ground and Upgrades to the clan blossom naturally.

-Lotus (Patience is key) – The Lotus clan dictates the flow of politics by turning the Political Mandates they play into anything they wish. A powerful ally to have at your side, and a terrible foe to betray.

-Turtle (Hard as the mind; delicate as steel) – The Turtle clan builds their Strongholds on top of the shells of giant legendary turtles. These indestructible fortresses can move around the map and even join in the fights for the provinces.

Played over the course of a year, each Season in Rising Sun is divided into a Political phase, where players prepare their clans and set their plans in motion, and a War Phase, where dominance over each of the contested provinces is decided.