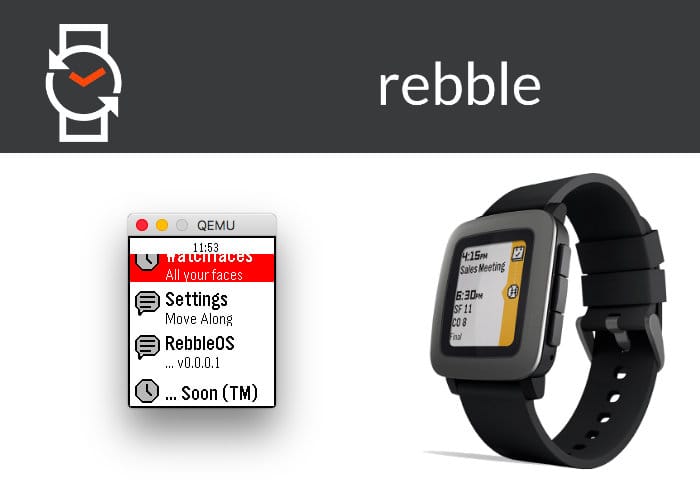 Pebble smartwatch owners worried they will not be able to use their smartwatch for much longer, may be interested to know that a new project called Rebble is currently under development. To create a new watch operating system for the range of Pebble smartwatches, saving the hardware from early extinction.

Unfortunately for Pebble watch owners the company was purchased by Fitbit who have already confirmed support for the range of smartwatches originally funded by a successful Kickstarter campaign will end this year on June 30th, 2018. Fitbit was originally going to end support at the end of 2017 but has kindly extended it by another six months to help Pebble users enjoy their hardware a little longer.

Now the new Rebble project is underway to construct a new Pebble watch firmware that is capable of running on the smartwatch and will hopefully be compatible with applications designed originally to run on the original Pebble operating system. RebbleOS is still in its very early stages of development and is currently in its alpha build for those interested to try out. The development team behind Rebble already have Bluetooth functioning correctly, allowing notifications to be sent from a smartphone or PC directly to the Pebble, and a selection of Pebble watch faces are also functioning. But at the current time the RebbleOS is still a little draining on the watches battery life and needs to be tweaked further.

It’s also not been confirmed whether any Pebble application developers will allow their applications to function on PebbleOS, after Fitbit stop support for the Pebble smartwatch. But as soon more information comes to light we will keep you up to speed as always. In the meantime check out the video below for a quick overview of the current state of the new PebbleOS Pebble smartwatch operating system and follows the link below for more information.