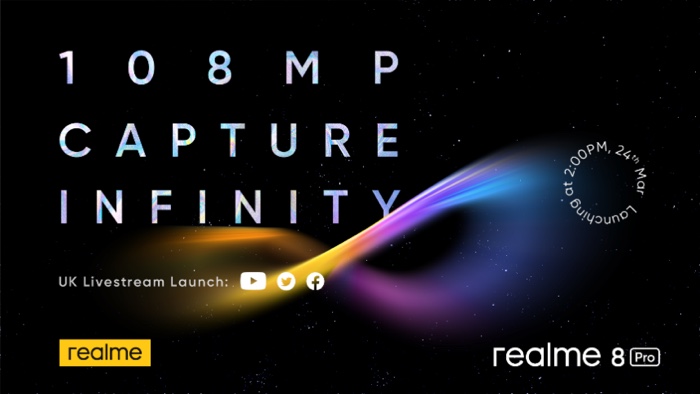 Realme has announced that it will be announcing some new smartphones on the 24th of March, the new Realme 8 series with the Realme 8 Pro.

The company revealed that the Realme 8 Pro will feature a 108 megapixel camera and the camera will use the Samsung 108 MP Sensor HM2.

realme – the world’s fastest growing smartphone brand – has today announced the arrival of the realme 8 Pro, launching in the UK on March 24th. Full details of the exciting new smartphone, which include realme’s first ever 108MP resolution camera, will be unveiled via realme’s UK live stream on March 24th at 14:00 UK time.

In addition to the brand’s first 108MP camera, the realme 8 Pro will boast trendsetting photography features, with sharper photo quality and the world’s first tilt-shift time-lapse video and starry time-lapse video functionality on a smartphone.

We will have full details on the new Realme 8 smartphones when they are made official at the press event on the 24th of March. The event will be live streamed at 2PM UK time.