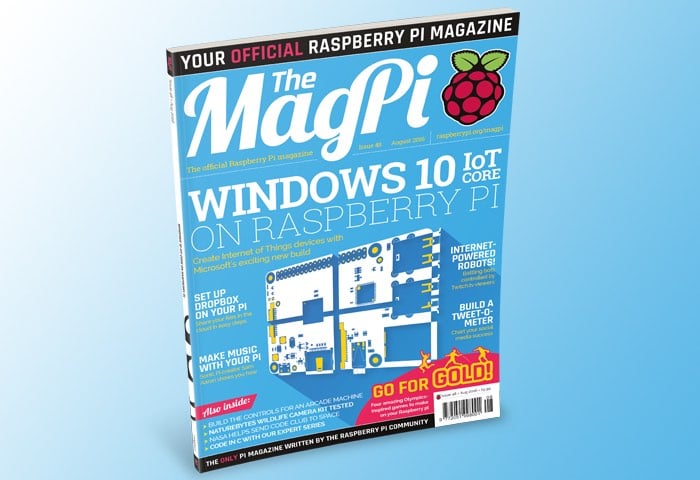 Raspberry Pi users that are interested in creating Internet of Things projects may be interested to know about this week’s official Raspberry Pi magazine magPi 48 provides more details on Microsoft Windows 10 IoT Core and what it can be used for.

The latest Raspberry Pi magazine is now available to purchase both digitally on iOS and Android and is also available as a hardcopy via subscriptions that are available via the official Raspberry Pi website, via the link below.

The Raspberry Pi Foundation explains more about what you can expect to enjoy in the MagPi 48 issue.

In 48 we cover the latest developments in Windows 10 IoT Core that have come about since the Raspberry Pi 3 was launched, and how to make use of them in your own projects. We’ve also got exclusive news on an upcoming kit specifically for the Raspberry Pi 3 that lets you create amazing projects right out of the box.

As well as all the Windows talk, we invite you to take part in the Scratch Olympics, continue building the arcade machine of your dreams, learn about Twitch-controlled robots, and read a review of the long-awaited NatureBytes wildlife camera.

You can also learn how to make this swimming game from the legendary Mike Cook, which involves paddling your arms wildly in the air in the general direction of a home-built sensor board to control your character.

For more information on the new Raspberry Pi Windows 10 IoT Core jump over to the official Foundation website for details by following the link below.

If you are interested in creating Internet of Things projects or require a smart home hub you might be interested in our home automation hubs and system guide.