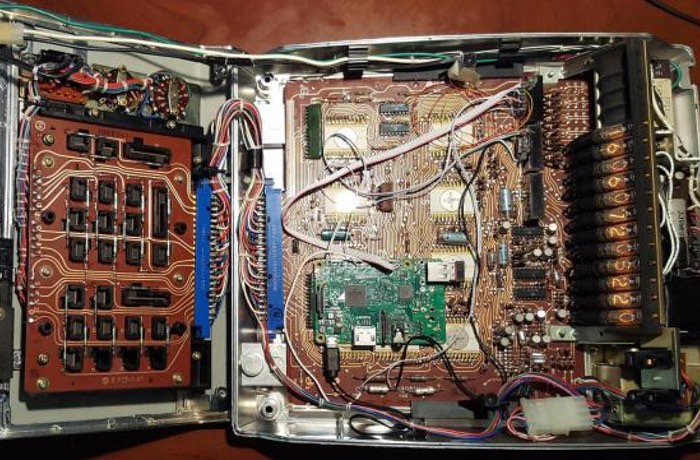 Eric Cohen has reverse-engineered a 1971 Singer calculator to create a Raspberry Pi powered UDP server combining old with new and fantastic way. Check out the video below to learn how the project was created.

While most hackers and makers may have ditched the awesome Nixie tubes inside, Eric has kept the system intact yet upgraded its internal components using the powerful Raspberry Pi mini PC.

There’s nothing quite like basking in the soothing orange glow of a cold-cathode nixie tube display. An excellent vehicle for aforementioned basking is the Singer/Friden EC1117 calculator. Released in 1971, this beauty sports a full dozen Hitachi CD-90 nixie tubes. Given the pervasive nature of modern computers, however, the EC1117’s number crunching capabilities may seem somewhat modest and its portability limited (even despite the convenient carrying handle).

Instead of watching TV I modified my EC1117 to function as a programmable clock and digital display. This was achieved by using an oscilloscope to reverse engineer the display interface of the EC1117. Once I understood the interface signaling and protocol, I used a couple of 4504 level shifters to connect it to the GPIO bus of a Raspberry Pi 2B. Then I wrote a small C program to emulate the bus protocol in software. The program busy polls the calculator’s 860Hz system clock waiting for a rising edge. Once the edge is found, it outputs a serial bitstream across the 4-wire bus to produce the desired display output. The C code also creates a thread listening for UDP packets. This thread decodes a simple ASCII protocol that allows wireless network clients to change the clock mode (e.g. different date/time formats), and also allows setting each individual digit to an arbitrary value.

For full code and schematics jump over to the official EPIEYE website via the link below.