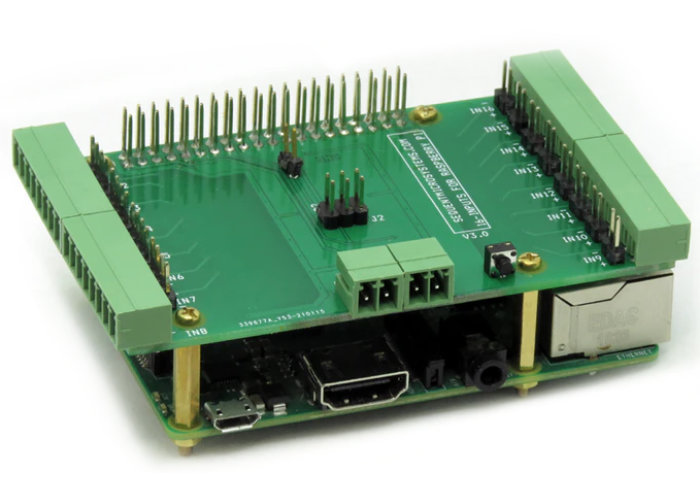 Raspberry Pi enthusiasts may be interested in the new stackable Raspberry Pi HAT capable of adding up to 128 oto-isolated iputs and more. p to eight cards can be stacked on top of one Raspberry Pi mini PC expanding the total number of inputs. The stack level is identified by setting it’s hardware address with one of the three on-board jumpers.

Each input can be jumper selected to read 3V-24V or 24V-240V signals. All the input circuits from the connectors to the opto-isolators have 50 mils clearance, and per IPC-2221B standard can withstand 240 volts. 128 ports, plus RS485 port for Raspberry Pi from $2 per port. All inputs are protected to reverse polarity, so you can connect even your high voltage lines without fear of starting fireworks. If you accidentally connect them backwards, nothing will happen except it will not work. The power supply is also protected to reverse power polarity.

Early bird pledges are now available for the creative project from roughly $40 or £29 (depending on current exchange rates), offering a considerable discount of approximately 11% off the retail price, while the Kickstarter crowd funding is under way. If the Raspberry Pi campaign successfully raises its required pledge goal and the project progresses smoothly, worldwide shipping is expected to take place sometime around April 2021. To learn more about the Raspberry Pi port HAT project play the promotional video below.

“Raspberry Pi can read 26 Input signals through the GPIO header, but sometimes you might need to read more. Since all GPIO pins are wired directly to the local processor, some hardware is required to connect them to the real world. Using the “16-Inputs” card you can build a modular data acquisition system with 16 to 128 digital inputs and industrial-grade pluggable connectors for under $2 per channel. You also get RS-485, Ethernet and USB ports, Wi-Fi, the Linux operating system, DIN-rail mounting, the schematics and the software of an open source design.”

“Sequent Microsystems “16-INPUTS for Raspberry Pi” card has 16 optically isolated digital inputs. Input ranges can be jumper-selected for each channel, from 3 volts to 24 volts or from 24 volts to 240 volts. Inputs can read both DC and AC signals. The card communicates with Raspberry Pi using only the I2C port, leaving all the other 24 GPIO pins available for your use. It has also an RS-485 port, a power LED and a pushbutton that can be used to shut down the Raspberry Pi.”

“The 16-INPUTS card needs +5VDC power. It can be powered from the Raspberry Pi, or from the on-board, 2-Pin pluggable connector. The power consumption is negligible, in the 10mA range. Only one source of power is required per system.”

For a complete list of all available early bird pledges, stretch goals, extra media and more features for the port HAT, jump over to the official Raspberry Pi crowd funding campaign page by checking out the link below.