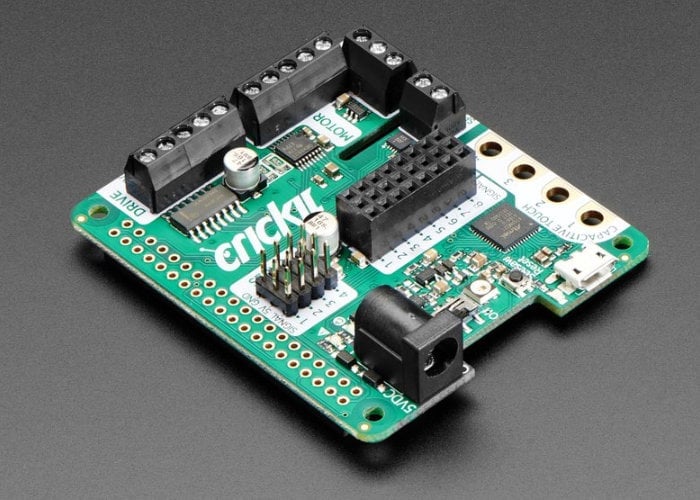 Raspberry Pi enthusiasts, developers and makers thinking of building robotic projects, may be interested to know that Adafruit will soon be stocking the Crickit HAT the company’s – Creative Robotics & Interactive Construction Kit.

Adafruit explains that the robotics Crickit HAT is powered by seesaw, Adafruit’s I2C-to-whatever bridge firmware. Enabling developers to only use two data pins to control the huge number of inputs and outputs on the Crickit. All those timers, PWMs, NeoPixels, sensors are offloaded to the co-processor. Specifications and features of the Raspberry Pi robotics HAT include :

– 4 x Analog or Digital Servo control, with precision 16-bit timers
– 2 x Bi-directional brushed DC motor control, 1 Amp current limited each, with 8-bit PWM speed control (or one stepper)
– 4 x High current “Darlington” 500mA drive outputs with kick-back diode protection. For solenoids, relays, large LEDs, or one uni-polar stepper
– 4 x Capacitive touch input sensors with alligator-pads
– 8 x Signal pins, can be used as digital in/out or analog inputs
– 1 x NeoPixel driver with 5V level shifter – this is connected to the seesaw chip, not the Raspberry Pi, so you won’t be giving up pin 18. It can drive over 100 pixels.
– 1 x Class D, 4-8 ohm speaker, 3W-max audio amplifier – this is connected to the I2S pins on the Raspberry Pi for high quality digital audio. Works on any Pi, even Zero’s that don’t have an audio jack!
– Built-in USB to serial converter. The USB port on the HAT can be used to update the seesaw firmware on the Crickit, or you can plug into your computer, it will also act as a USB converter for logging into the console and running command lines on the Pi. 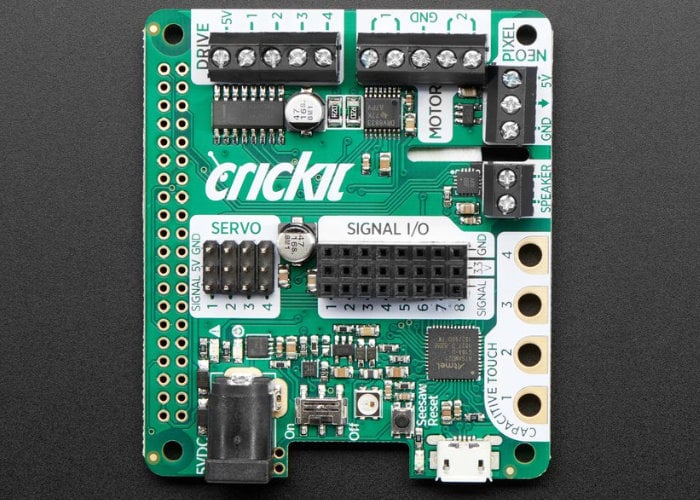 “Control of the motors, sensors, NeoPixels, capacitive touch, etc is all done in Python 3. It’s the easiest and best way to program your Pi, and after a couple pip installs you’ll be ready to go. Audio is handled by the Pi’s built in audio system, so anything that plays audio will come out the speaker – that includes Python commands or any application with sound. All are powered via 5V DC, so you can use any 5V-powered servos, DC motors, steppers, solenoids, relays etc. To keep things simple and safe, we don’t support mixing voltages, so only 5V, not for use with 9V or 12V robotic components.”

For more details jump over to the official Adafruit online store via the link below where the Raspberry Pi Crickit robotics HAT will soon be available to purchase priced at $34.95.