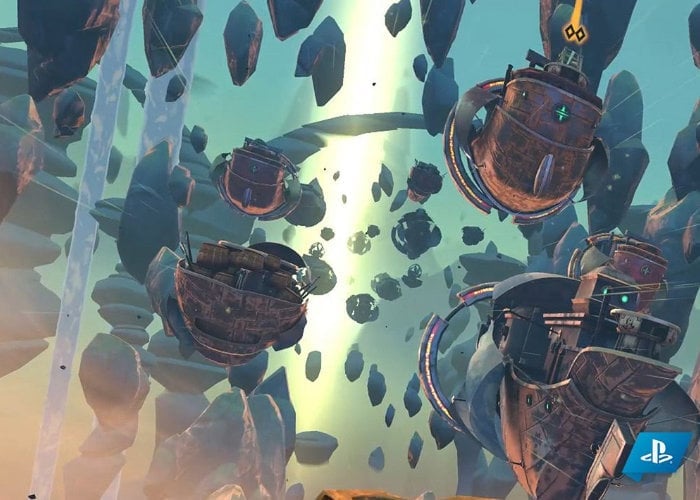 A new PlayStation virtual reality game has been unveiled this week during the recent live streamed State of Play presentation today in the form of the PSVR Stardust Odyssey space shooter. Stardust Odyssey is an 80’s-style, French sci-fi universe inspired by the likes of Mœbius and Jean-Claude Mezières, leaning more towards a world of fantasy based on magic and not industrial, advanced technology.

“We wanted to create a world where you would steer ships filled with ornaments and items made of primitive materials, such as wood, stone, leather and gold, floating through space with their wind-filled sails. The idea was to create a warmer feeling for the players, in contrast to the cold, futuristic materials and minimal design often found in sci-fi games.

The second key element behind the game’s artistic concept was to come up with an original, exotic sci-fi look, taking inspiration from ethnic oriental cultures. The game’s main source of reference is the Silk Road and its convoys of merchants constantly travelling across land and sea to trade their merchandise; the middle-eastern civilizations of nomad clans and ethnic groups like the Berbers.

Choosing the Silk Road as a reference point meant inviting players to travel through two types of environments and atmospheres: deserts and seas. Instead of flying through space, our ships, designed like boats with sails, would float above a sea of clouds. With the constant presence of sand covering the hulls and cabins also referring to the idea of stardust.”

Learn more about the new PSVR Stardust Odyssey space shooter over on the official PlayStation blog.