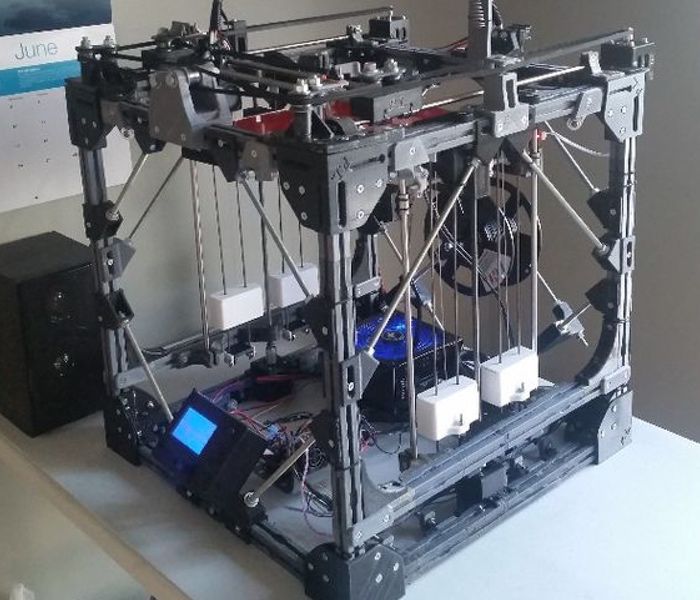 Since 3D printers have arrived and been available to purchase by consumers, it has always been joked that a 3D printer could be used to create a copy of itself, although this is still a little far from being 100 percent true.

Now Instructables user Pat L aka redhatman and roommate have used a Prusa i2 printer together with around $600 and three months work to re-create a new 3D printer that is capable of printing 3D objects.

Even though the project was a success, some of the parts in the new printer needed to be purchased although most of the plastic components of the new 3D printer were created using the older 3D machine.

From those that own 3D printers, to those who simply are just curious about their capabilities, one topic that comes up rather frequently is the idea of “Printing another 3D Printer”. Now this may not be 100% possible when considering components such as the electronics, however, nearly every 3D printer today in the open source community utilizes to some degree, 3D printed parts in it’s construction. From fan mounts to spool holders, a person can spend a few minutes searching the web, and likely find a suitable design to use on their own printer This has proved to be very useful, especially for those who love to build, modify, and design their own machines.

I had went in half and half on a Prusa i2 machine with my roommate late last year. Knowing we would not be living together this coming school year, we were faced with a predicament I’ll refer to as “who’s going to keep the printer”. Given this situation, I proposed an idea. If we could agree on a value for what the printer was worth, I would accept half of the current resell value and put that towards building a new printer. The deal was made under the condition that we continued to share the printer for the remaining 3 months of the lease. With a mere 3 months to build a printer from scratch, it was time to get to the grind; do lots of research, design like crazy, and more importantly, PRINT LIKE CRAZY.

Full instructions on how to create the 3D printer have been kindly published over on the Instructables website enabling anyone to build their very own if they have access to an existing 3D printer. I wonder how long it will be before a 3D printer will be able to completely replicate itself 100 percent.