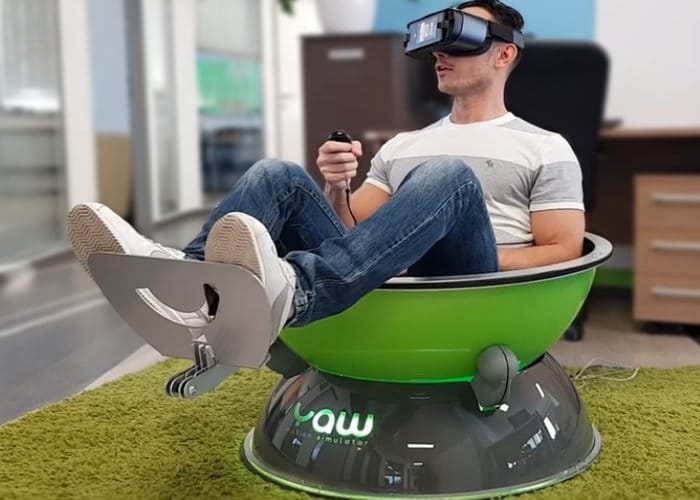 Virtual reality gamers looking for an affordable and open source way to add further immersion to their virtual reality experiences may be interested in a new portable VR motion simulator called Yaw. Designed by Intellisense based in New York, the unique virtual reality motion simulator has a small form factor, is lightweight and also silent in use offering 3DoF and a high dynamic range. Watch the demonstration video below to learn more about the collapsible design of the Yaw motion simulator, which has this week launched via Kickstarter with the aim of raising $150,000 over the next 45 days.

Yaw is available to back with early bird pledges starting from £660 or $890, with shipping expected to take place during August 2018. If you are currently at CES 2018 Yaw is being showcased at booth 52871. The Yaw motion simulator system is compatible with SimTools software and more than 80 different simulator applications, including the most well-known and popular simulator brands, say its creators. The developers of Yaw are also currently in the process of adapting the new hardware to be compatible with other non-PC platforms such as the Oculus Go, Samsung Gear VR and PlayStation VR.

Yaw offers unlimited 360 degrees of movement on the vertical axis along the horizontal axis provides 50 degrees of movement to provide a more immersive virtual reality experience. For more details, full specifications and a list of all available pledges currently available, jump over to the official Kickstarter crowdfunding campaign page by following the link below.