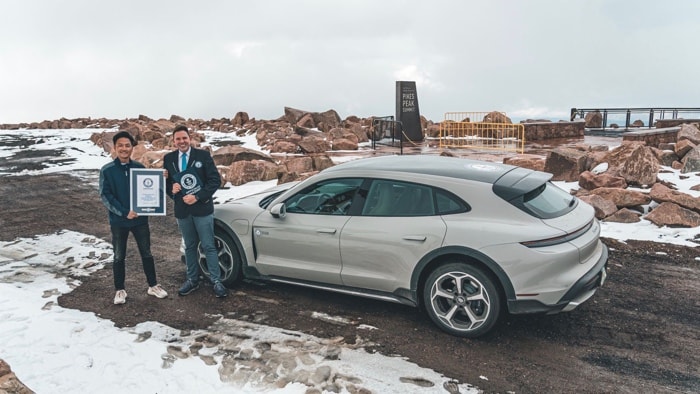 Porsche has announced that they have set a new Guinness World Record with the Porsche Taycan Cross Turismo at Pikes Peak.

The record is for the greatest altitude change ever achieved by an electric vehicle, the record is 4,842.967 metres which is just over 3 miles, more details are below. The record attempt started at the Eagle Mine in Michigan and finished at Pikes Peak

With their precise depth measured and verified by specialist surveyors, the team emerged from the mine just after dawn and began their relentless journey to gain altitude. Their final destination would be the 4,302-metre summit of Pikes Peak in Colorado, home to the world famous Pikes Peak International Hillclimb, which will run for the 100th time this year.

The journey was among the most demanding the car and team had ever experienced. It would take them across six states, and would ascend 4,842.967 metres, or just over three miles, without ever leaving the ground. The oxygen available to them at the start of the journey fell by 40 per cent by the time they reached the top of the mountain. Along the way they encountered sun, rain, snow and ice, fatigue and the ever present threat that the mountain road – and the path to their record – could close due to the weather conditions.

You can find out more details about the new world record set by Porsche and their Porsche Taycan Cross Turismo over at their website at the link below.