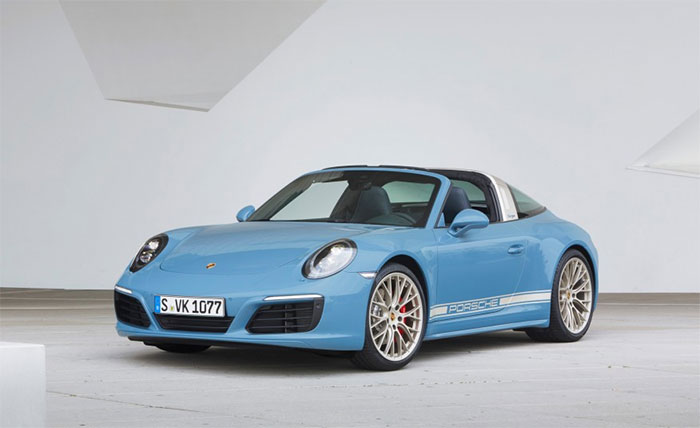 Of all the Porsche 911 flavors out there, I would say that my least favorite is the 911 Targa. I just don’t like the way the car looks in profile. I would make an exception for this really good-looking Porsche 911 Targa 4S Exclusive Design Edition. It’s a limited edition car with about 100 units available globally.

It wears Etna Blue paint on the outside, a shade that was once used on the 1960-1961 Porsche 356B. Power for the car comes from a 420hp 3.0L twin-turbo flat-six, the standard engine for the Targa range. The badges are painted in the same blue color and the graphics and wheels are in a white gold metallic color.

The rear deck lid vent is in black and the interior looks pretty cool. I do like how the profile of the car is embossed in the leather of the center console. The car gets 18-way sport seats inside and some blue leather trim. Pricing is unknown, but it is expected to be a significantly bump compares to the $123,650 of a standard Targa. I’d rather have a Cayman GT4, but in the realm of Targas this is one of the best looking.