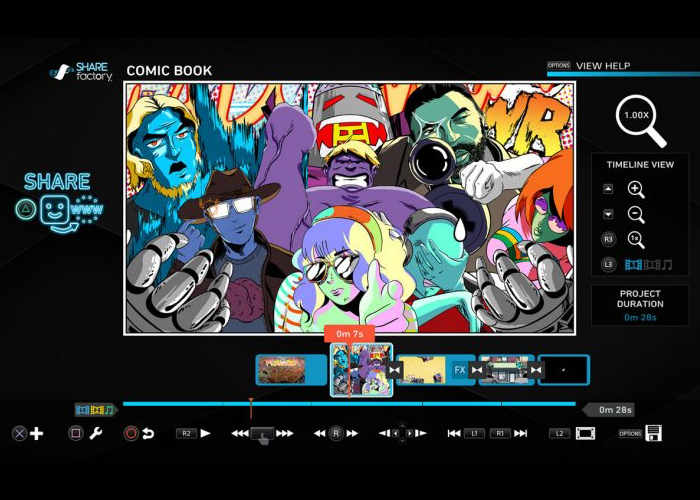 PlayStation Sharefactory users will be pleased to know that Sony has rolled out a new update in the form of Sharefactory Update 3.00. Bringing with it a wealth of new content including new themes, camera effects, animations and more. The update is already available to download and adds new transitions to the service in the style of comic books as well as the Uncharted 10th anniversary Themes. Sony has also made tweaks to Sharefactory’s code making it load faster and enhancing audio quality. Other features of the PlayStation Sharefactory Update 3.0 include :

Today we’re pleased to announce a new Sharefactory update – v3.00 – which includes new themes and a variety of features requested by the community, including camera effects and text/sticker animations. First – we’re happy to add two new themes with this update. The first theme is a “comic book-style” theme, which is packed with content including three intro, title and outro clips, eight transitions, three backgrounds, 39 stickers and a comic style font. The second theme is a special one for our PlayStation fans. To celebrate the 10th anniversary of the Uncharted franchise from Naughty Dog, we’ll have a dedicated theme to honor this critically-acclaimed franchise. The new update also includes seven new camera effects. You can use the new “Hollywood-style” effect to add more flair to your edits. Add quake, bounce, stomp, pulse and more to enhance your best gameplay achievements.

For more details on the latest PlayStation Sharefactory Update jump over to the official PlayStation blog via the link below.