The more accurate term would be ‘light barrier,’ basically a band of laser light that disorients mosquitoes. The funny part is the very person who ‘invented’ this deterrent, Hungarian physicist Szabolcs Marka, isn’t sure why mosquitoes are repelled in the first place. Neither does the Bill & Melinda Gates Foundation despite having given him two hefty grants in the past handful of years. Seen below is Marka in the heat of action at his swanky lab. 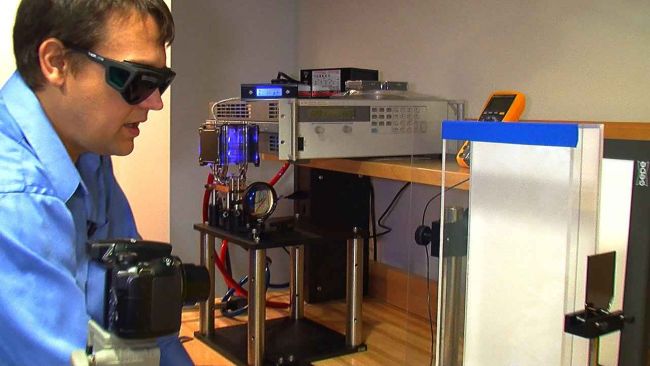 Having previously cut his teeth in the nuclear industry, Marka pulled off a career shift studying black holes before chancing on mosquito repellant v2.0. Sounds like a zigzagging career trajectory but that’s the guy’s background. Marka never really planned on developing a laser-based repellent in the first place, however, but his research in astrophysics segued into optics then all of a sudden he’s chasing an itch. If laser optics can be used to disorient a mosquito’s tracking systems, what about a laser barrier?

At the moment Marka, his wife, and a colleague are hard at work ironing out the kinks of their cutting-edge new invention. There might not even be a working prototype for years to come. Still, if something viable comes out of it, the source of his funding could further subsidize the program. Keep in mind Bill Gates has personally swore to eradicate malaria as well.