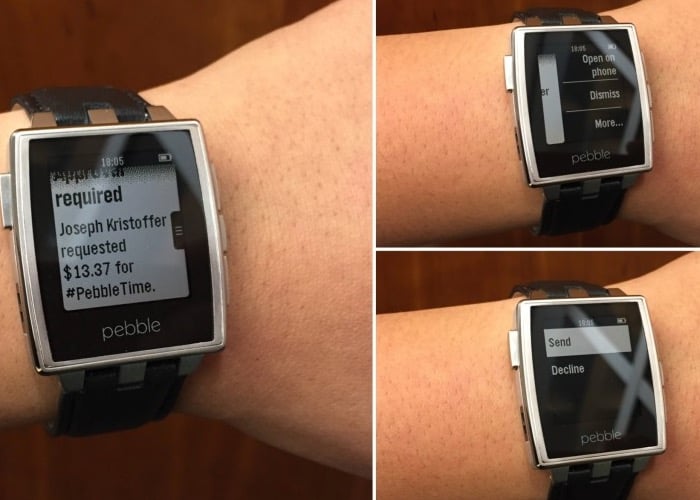 Smartwatch makers Pebble have this week announced the roll out of a new update to their wearable Android compatible watch that now brings with it support for Android Wear notifications.

Pebble explains : “Reply to a Hangouts message with emoji? Thumbs up. Send moolah to friends who pass a Square Cash request your way? Make it rain!

These new interactions from Pebble are amazing because Android developers do no extra work to make the magic happen. The Pebble Android app uses actions baked into Wear-integrated apps already. If you can do it with Android Wear, you can do it with Pebble.

Integrating Pebble with Android Wear is thanks to the open approach Google built into Android’s notification system. Openness is a value Pebble shares and appreciates. We hope more mobile operating systems follow suit so all Pebblers—no matter their smartphone choice—can take advantage of all the delightful features we introduce now, and in the future.”

• NEW: Android Wear Notifications. Reply and act on Android app notifications on Pebbles running Firmware v2.9 (in Beta) or higher.
• NEW: Support for Android 4.0+ devices. Pebble’s latest Android app (v2.2) previously required devices running 4.3 (Jelly Bean) or higher.
• NEW: Auto app updates. When available, updated apps and watchfaces will be installed on Pebble at times when the watch is idle (e.g. charging).
• FIXED: Issues with Whatsapp notifications
• DEVELOPERS: UTF-8 support in PebbleKit JS
• Bug fixes and stability improvements.
• Users wishing to beta test this Pebble app must have a device running Android 4.0 or higher.
• Download the Pebble Android App (2.3 Beta) by joining our Beta Testing Group.
• After installing and opening the Android Beta app, you will be prompted to update your Pebble to a Beta version (2.9) of the Firmware (required to use the new features in the 2.3 Android app). If this does not happen automatically, select Support » Check for Updates to install the 2.9 Beta Firmware.

For more information on the new Pebble smartwatch update and the features it has added to the Pebble interface jump over to the official Pebble blog website for details via the link below.