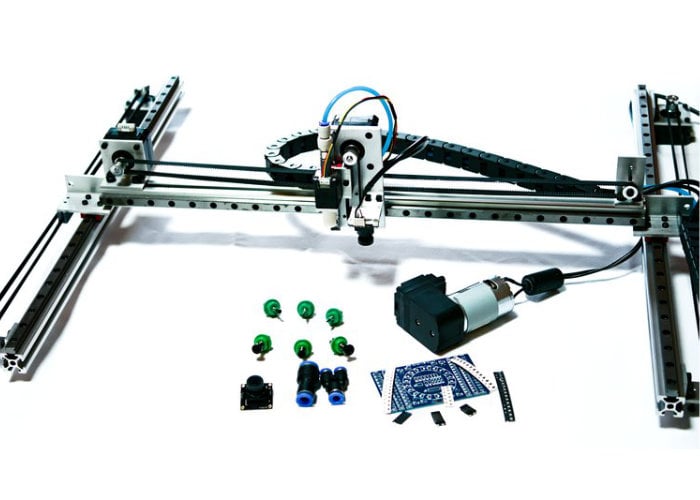 Citrus CNC has created a personal open hardware PCB assembly machine aptly named the SimplePnP. Launched via the Crowd Supply website the project has raised over $28,000 and will soon come to the end of its campaign. Pledges are still available offering partially assembled systems. Watch the demonstration video below to learn more about how the SimplePnP can assist your in-house PCB production needs.

“Printed circuit board assembly is a critical part of building electronic devices. While high volume PCB batches are normally handled by specialized machines in a factory assembly line, prototypes are often built by hand. Hand assembly is slow, difficult, and extremely tedious, but out-sourcing such work to a factory is rarely cost-effective. And even if it were, it is often infeasible for other reasons:

– You might need more control over component sourcing
– Shipping components to the assembly house might not be a viable option
– Import costs for assembled boards can be significant
– Assembly options for quick-turnaround and iterative work are often restricted
– Outsourcing assembly for a small number of boards with many of the same component, such as LED panels, is often quite expensive

“Investing in a personal pick-and-place machine is one way to address these issues. While not as fast as their industrial counterparts, such machines easily outpace the physically tiresome act of hand assembly. And they do so without breaking the bank. SimplePnP was designed to be reliable, accurate, affordable, and suitable for a wide variety of components. It is a good choice for electronics startups, inventors, researchers, and hackerspaces alike. By taking advantage of a low backlash timing pulley and a linear rail system, SimplePnP is able to place components accurately. It achieves a step resolution of 10 microns using richly featured Trinamic stepper drivers.”