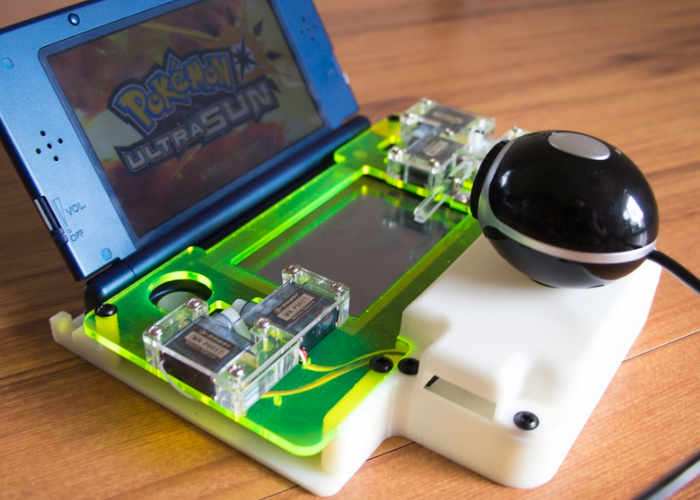 Anyone interested in learning more about robotics or gamers looking to advance automatically through levels may be interested in a new programmable robot created by Carl Newby called the GamePRo Robot. Designed to attach to a Nintendo 3DS handheld console and then be programmed to carry out in game tasks the small robot is a huge time saver. Watch the demonstration video below to learn more about the 3DS programmable robot that is equipped with a web camera to detect changes in the console screen. Allowing you to carry out repetitive moves automatically without needing to be at the console.

The GamePRo is a robotic device that attaches to a 3DS console and can be programmed to carry out in game tasks. It uses servo motors to press buttons on the console and has a webcam mounted to detect changes on the console’s top screen and a light sensor mounted on the bottom. A number of programs have already been written for the Pokemon series games including automatic breeding and soft resetting for shiny Pokemon. Note, existing programs are for windows only, not mac. For more information on the device itself please visit the official Facebook page or Youtube Channel.

The GamePRo product has been on the market as a fabricated plastic or aluminium unit produced by CNC machining or 3D printing. These were expensive to manufacture and were making the cost of the unit too pricey for most customers. By Injection molding these parts the cost will reduce substantially, however this requires a significant investment for the tooling of the mold. This Kickstarter is all about raising the funds to cover the tooling costs which will make the GamePRo accessible to many more people.

The GamePRo programmable robot has this month launched via Kickstarter and is now available to back with pledges starting from roughly $60 and shipping expected to take place early in 2018. For more details jump over to the official Kickstarter campaign page by following the link below.