Google Nexus 5 has seen its fair share of rumors. The handset was first see in Android 4.4 KitKat video. Earlier today, we saw some leaked images and a video of the purported Nexus 5, which was left charging at a bar by a Google employee. Google Nexus 5 was also spotted at FCC last week along with a number of unofficial render designs.

Now, the purported Google Nexus 5 was spotted on a benchmarking site, GFXBench, confirming that the handset will launch with Snapdragon 800 SoC clocked at 2.26GHz.

According to GFXBench results, the alleged Google Nexus 5 is codenamed “Hammerhead”. The benchmarks listed the device software as Key Lime Pie, which makes sense as Google internal documents called Android 4.4 Key Lime Pie. The most interesting thing in the results is the resolution and the max CPU clock speed. The display is listed as 1794 x 1080 and the max CPU speed as 2265MHz, which confirms that the purported Nexus 5 packs Snapdragon 800 chipset along with a 1080p display. 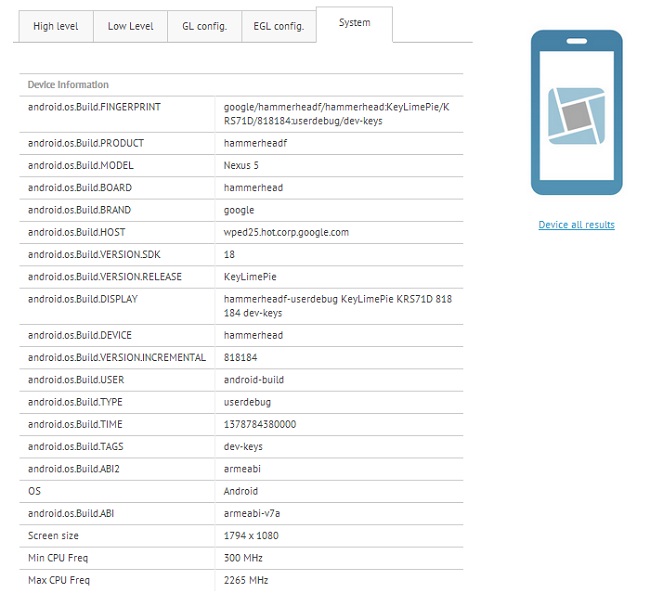 The alleged Google Nexus 5 is expected to launch on October 14th along with Android 4.4 KitKat, with the availability date to be 31st of October.

Let me warn you to take this rumor with a grain of salt, as there is no official word from Google about it. We’ll let you know if any information pops up on the internet.