Google has announced the addition of a new feature to the Chrome web browser called Chrome supervised user which is being created to help provide more options for families to protect members from websites and may contain inappropriate content. 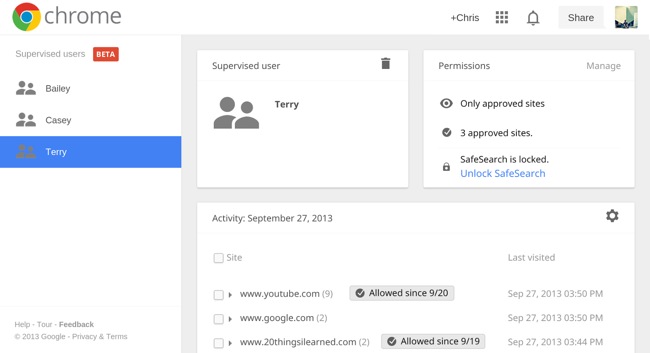 The new supervised user feature has this week been launched in the beta channel preview and enables administrators of Chromebook’s or other computers to set up accounts for other family members as a supervised user.

Allowing them to use the Google Chrome browser in relative safety with parents knowing that their child is unlikely to access inappropriate content whilst using the computer.

Once a Chrome supervised user account has been created parents are then able to manage and review a history of the webpages that have been visited and also enable or block websites they would like the Chrome browser supervised user to be able to access.

For more information on the newly added Chrome supervised user feature jump over to the Google Chrome Blog for more details and access to the beta channel preview which can be enabled on your Google Chromebook as well as Chrome beta for Windows, Mac and Linux, too by downloading the latest beta version of Chrome that will be rolling out this week.