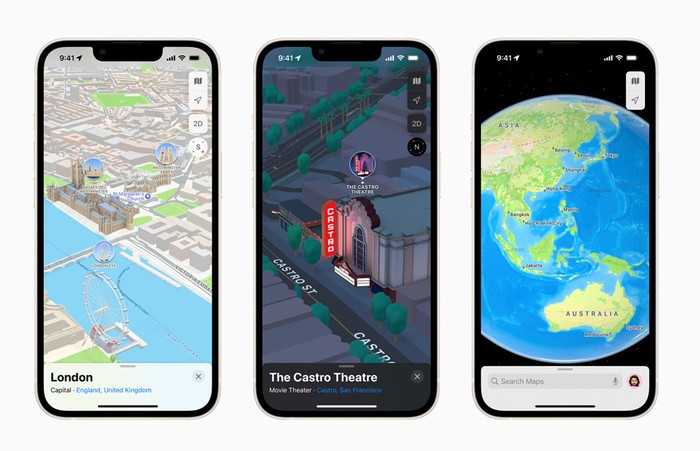 Included in the release of the new Apple iOS 15 operating system for the companies iPhone and iPad devices, Apple has introduced new features to its iOS Map application allowing users to explore major cities inglorious three dimensions. The 3D maps experience can be used in London, Los Angeles, New York City, and San Francisco at the current time with more cities expected to be added in the near future.

“We are thrilled to offer the new Apple Maps experience. Maps is the best way to navigate the world: It is easy to use, beautifully designed, and built with privacy at its core. With this update, we are pushing Maps even further, providing more ways for users to discover the natural beauty of the world and explore cities through a new 3D view,” said Eddy Cue, Apple’s senior vice president of Services. “Our goal has always been to build the best and most accurate map in the world. The upgrades in Apple Maps are a continuation of that effort, with features and an attention to detail that only Apple can deliver.”

“With the release of iOS 15, Apple Maps gets its biggest update ever with a city experience that offers rich details, driving routes with better navigation, immersive walking directions shown in augmented reality, and much more. The update, which expands on the new map that Apple spent years building from the ground up, is now available in London, Los Angeles, New York City, and the San Francisco Bay Area, with more cities to come.”

– Look Around gives users a way to explore parts of the world through an interactive 3D street-level experience and a smooth, seamless 360-degree view. Customers anywhere in the world can explore places like Dublin, Edinburgh, London, Los Angeles, New York City, Tokyo, Toronto, and the Italian countryside.

– Cycling directions show the elevation for a ride, how busy a street is, and whether there are stairs along a route. With voice guidance and Haptic Touch on Apple Watch, users can stay even more focused on the path ahead while enjoying their ride.

– Speed cameras let users know when approaching speed and red light cameras along a route, with the added ability to see where cameras are located on the map.

– Share ETA enables users to share an estimated time of arrival with family, friends, and coworkers with a simple tap or by asking Siri.

– Incident reports make it possible to safely and easily report an accident, hazard, or speed check along a route by simply letting Siri know “There’s an accident up ahead” or “There is something on the road.” Users can even report when incidents displayed on the map have been cleared, all while keeping their focus on the road.

– Flyover offers a way to see select major metro areas with photo-realistic, immersive 3D views. Users can move their device through space to view a city from above, or explore in high resolution as they zoom, pan, tilt, and rotate around the city and its landmarks.

– Favorites provides one-tap navigation to frequently visited places. Whether they’re headed home, to work, to the gym, or to school, users can simply tap and go once a location is added to Favorites on the launch screen.

– Indoor Maps for airports and malls allow users to simply open the Maps app and see what level they’re on, look for restrooms, and even find out which stores and restaurants are open.