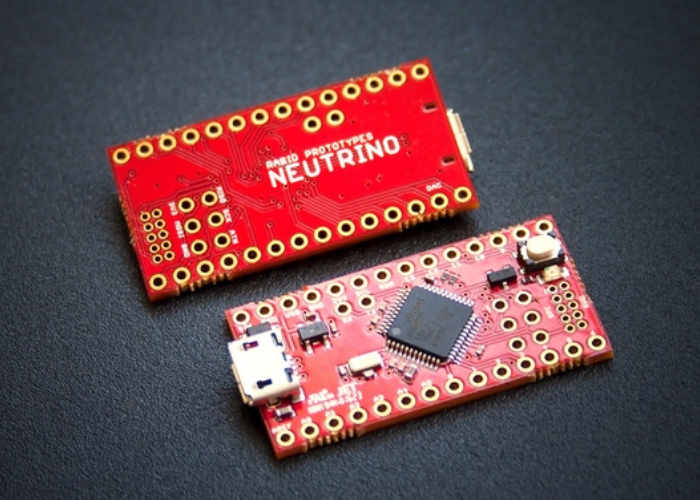 Serial Kickstarter entrepreneurs Rabid Prototypes have once again taken to the crowdfunding platform to raise funds to manufacture their new inexpensive, open source, miniaturised version of the Arduino Zero, which takes the form of the Neutrino 3.0 and builds on previous boards in the range. The open source development board features a 32-bit ARM processor running at 48MHz, and 32K of RAM and offers far more functionality than your typical Arduino saves developers. Technical specifications of the Neutrino 3.0 include :

This new revision of the Neutrino will feature several changes to the design, some of which have yet to be determined, but most notably:

– The current TQFP package for the SAMD21 will be replaced with a QFN package and will be shifted closer to the USB connector. (There’s a very good reason for this, but that’s for a future Kickstarter campaign!)
– The SPI header in the middle of the board will be moved to the rear. (This is also something I need to do for the sake of future products.)
– I will be moving the status LED from pin 13 to the presently unused TXL pin. (This will allow me to remove the mosfet and a pull up resistor that are taking up precious space.)
– I may be adding a second LED to indicate power as I did on the Tau.
– I may also be swapping the diode on VIN for another slightly larger one with a higher current rating but also a slightly higher voltage drop. Undecided.

Because it has the same processor and pinout, all libraries written for the Zero will work on the Neutrino without any modification! Finally, being open-source, you’re free to modify it as you wish and integrate it into your own designs – without ever needing to pay any royalties or licensing fees!

The Arduino Zero Neutrino 3.0 is now available to back via Kickstarter with early bird pledges starting from just $20 and delivery expected to take place during January 2018. For full specifications and more information jump over to the official Kickstarter campaign page via the link below.