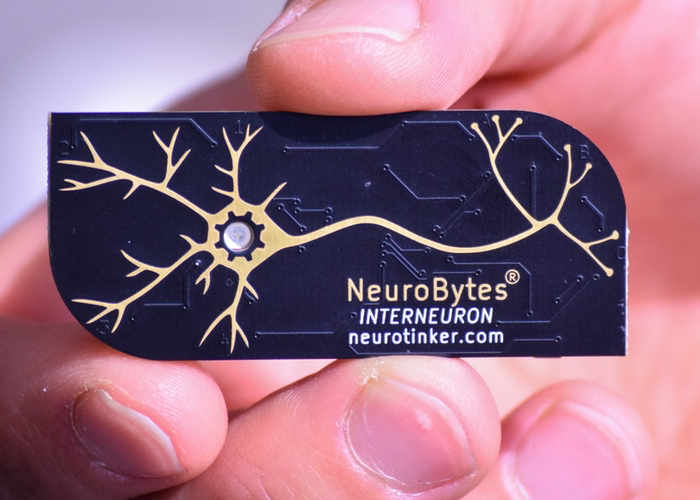 Developers, makers and hobbyists or anyone that would like to learn more about the function of our brains Neuron activity may be interested in a new piece of hardware created by NeuroTinker, aptly named NeuroBytes. Designed for makers 12 years and above the small pieces of open source hardware allow you to build your own brain that is capable of reacting to different stimuli including light, sound and touch. Watch the demonstration video below to learn more about the hardware which replicates the human bodies biological nervous system that contains hundreds of different types of neurons.

Neurons work using a combination of electrical and chemical signaling. The color-coded LED on each NeuroBytes module illustrates how the electrical signaling works, and the cables that connect them together into circuits model the excitatory and inhibitory neurotransmitter chemicals that neurons use to signal each other.

Like biological neurons, NeuroBytes are modular, so all of our kits are compatible with one another. Any circuits or kits can be added to in the future with additional NeuroBytes to create something completely new!

NeuroBytes are Open Source Hardware as defined by the Open Source Hardware Association. That means all source files — schematics, PCB layout, firmware, etc — are shared freely in their original form. You can use NeuroBytes as they are to build complex and fascinating neural circuits, but if you want to dive deeper you can add to the foundation we created by inventing your own accessories and behaviors. If you buy a NID (Network Interface Device), you are well on your way; this device is capable of updating NeuroBytes boards with the latest operating firmware, and can be easily switched to upload your compiled programs rather than those from our repository.

We try to use free and open source software for producing these files (such as Inkscape and KiCad), so you should not need to make substantial investments in order to view and edit our files. Our previous NeuroBytes v0.91 were certified under the OSHWA Open Hardware Certification Program (US000024); we intend to apply for certification of our new ecosystem and will update backers when the certification process is complete.

Jump over to the official Kickstarter crowdfunding campaign below where kits are available from $59 with shipping expected to take place during April 2018.