The iFixit team have been at its again with their screwdrivers this week, and applied their dismantling skills to Motorola’s Droid 4 smartphone, revealing its inner workings for all to see.

After taking the Motorola Droid 4 apart, iFixit only awarded the smartphone a measly 4 out of 10 for repairability, due to the poor way the Droid 4 has been put together. Making it very tricky to replace certain items now the keyboard is integrated into the motherboard. Meaning you’ll have to replace both components if a key on the keyboard becomes faulty. 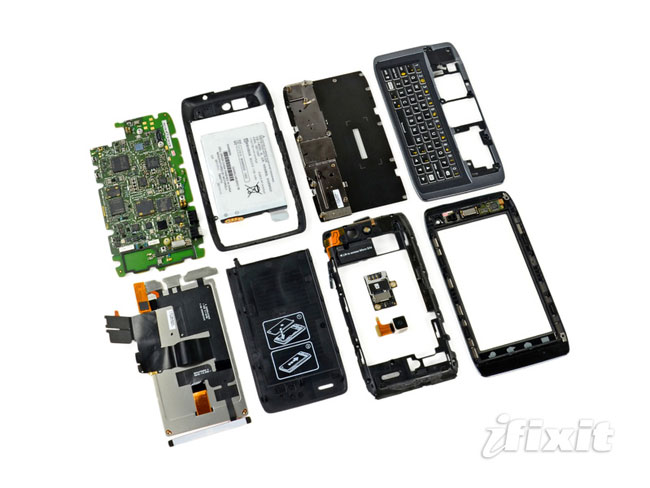 The 4 out of 10 repairability score, is by far the lowest iFixit have scored a smartphone bearing the Droid name. Motorola does however provide owners with a rear panel removal tool, which was originally thought to be a Sim removal tool, but after examining the manuals iFixit discovered the truth.

iFixit explains a little about what they found behind the Droid 4’s case:

“The first thing we observed on the innards of this Droid was a large sticker covering the battery. It contained identifying information for the phone, as well as several statements telling the user that the battery is not removable. This is a huge (negative) departure from earlier Droids, where the battery was always user-replaceable.

Removing the sticker revealed the Droid 4’s battery, and confirmed our assumptions: the Droid’s battery is a lot larger and more troublesome to remove than last year’s model. Two T5 Torx screws and gobs of adhesive hold the battery in place. The adhesive is so strong that you may accidentally bend the battery too much (and cause it to possibly ignite) if you try removing it with just your fingers. So instead, use a flat pry tool like a spudger to pry the battery from the phone.”

You can view the complete teardown of Motorola’s Droid 4 smartphone over on the iFixit website.