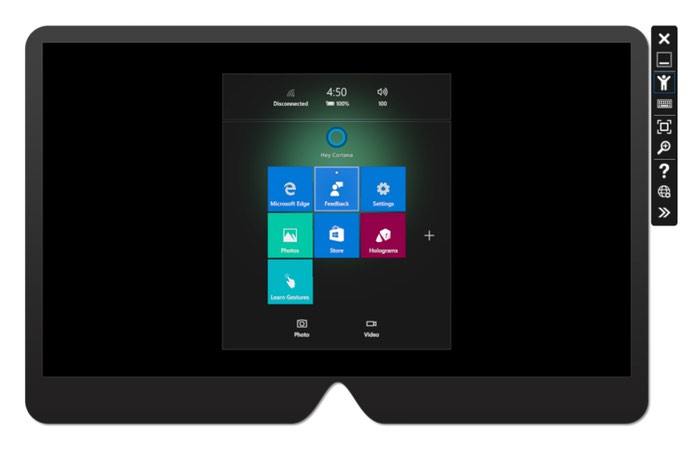 Developers that would like to start developing applications for Microsoft’s new HoloLens augmented reality headset hardware but don’t currently have the $3,000 to be able to purchase the developer kits which have started shipping from today.

May be interested in the new HoloLens Emulator that has been released by Microsoft to allow developers to create and test holographic applications without the need for a headset.

The new HoloLens emulator application allows you to test holographic apps directly on your PC and comes with the HoloLens development toolset. The emulator uses a Hyper-V virtual machine says Microsoft and any inputs that would usually be read by the sensors on the HoloLens are instead simulated using your keyboard, mouse, or Xbox controller. Microsoft explains more :

Apps don’t need to be modified to run on the emulator and don’t know that they aren’t running on a real HoloLens. Controlling the emulator is very similar to many common 3D video games. There are input options available using the keyboard, mouse, or Xbox controller. You control the emulator by directing the actions of a simulated user wearing a HoloLens. Your actions move that simulated user around and apps running in the emulator respond like they would on a real device.

The Simulation tab shows the current state of the simulated sensors used to drive the HoloLens OS within the emulator. Hovering over any value in the Simulation tab will provide a tooltip describing how to control that value. The emulator simulates world input in the form of the spatial mapping mesh from simulated “rooms”. This tab lets you pick which room to load instead of the default room. Simulated rooms are useful for testing your app in multiple environments. Several rooms are shipped with the emulator and once you install the emulation.

For more information on the new HoloLens Emulator jump over to the official Microsoft Developer website for details via the link below.