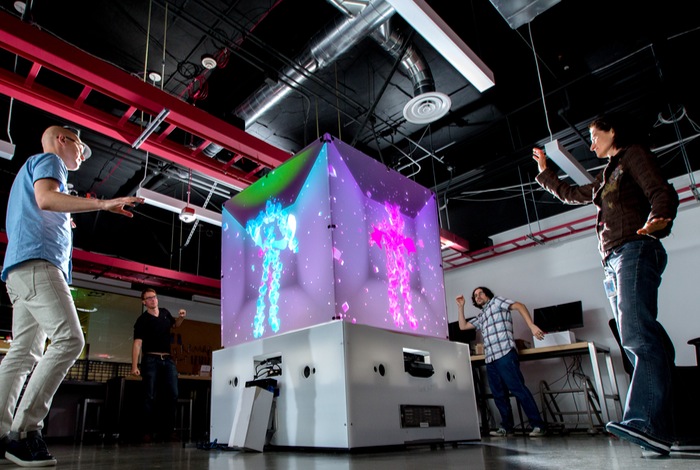 The Microsoft Cube measures 4 feet square and is a 5 sided installation that allows passers-by to interact with it. Watch the video after the jump to learn more about the Kinect Cube project and see it in action.

The Microsoft Cube is powered by 5 computers and four Kinect gesture controllers and was originally born from a brainstorming on how to create something that would live at the intersection of technology and design. Microsoft explains a little more :

“Participants stand in front of the giant structure and the Cube reacts, pulsating to music and tracing the movements of those around it. The Kinects can read up to three people on each side, and you can see others through the Cube, which acts as a portal, virtually connecting people who are separated in physical space.

The Cube started out as a pie-in-the-sky idea that took shape over many months as people from different corners of the company brought their expertise, and passion, to the project.

The team at Microsoft worked with WorldStage, an event technology company based in New York and Southern California, to design the prototypes and the final Cube with custom-fabricated screens made from projection material and clear acrylic, instead of using LCD displays. The Cube was constructed with seamless corners joined to minimize optical distortion of the images that are projected from the inside.”

For more information on the new Microsoft Cube jump over to the official Microsoft Blog website for details.