McLaren has announced a special edition of their 650S, the McLaren 650S Le Mans, which is being launched to celebrate the 20th anniversary of the McLaren F1 GTR at Le Mans.

The company has said that there will be a limited production run of just 50 vehicles of their new McLaren 650S Le Mans.

Designed by MSO in consultation with Peter Stevens, the designer of the iconic McLaren F1, the McLaren 650S Le Mans will be offered as a coupé only, and will borrow a number of styling enhancements from the iconic race-winner, most notably the roof-mounted ‘snorkel’ air intake. This fully-integrated ‘snorkel’ channels airflow to the familiar 3.8-litre twin turbo V8 engine, while also providing enhanced aural drama within the cabin, while the front wings feature subtle louvres to reduce pressure over the front wheels, increasing downforce.  The unique ‘Le Mans Edition’ lightweight wheels – 19-inch at the front, 20-inch at the rear – are styled around the design of the motorsport rims fitted to the 1995 racers. The rims wear the McLaren-developed Pirelli P Zero™ Corsa tyres and are mounted in front of carbon ceramic brakes as standard, with McLaren Orange callipers. 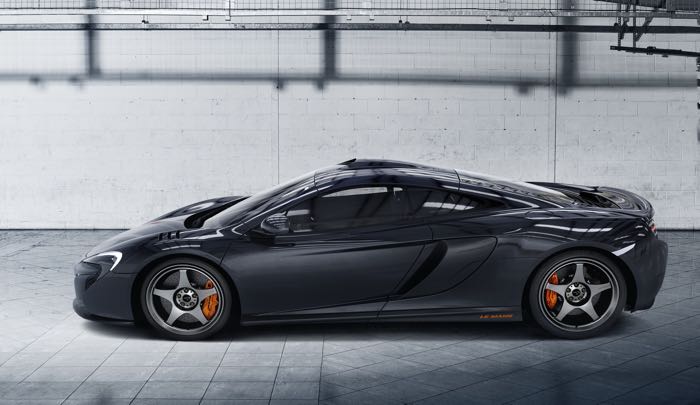 Each of the 50 limited edition McLaren 650S Le Mans vehicles will be available for £244,500 and they will be launching in the middle of the year, you can find out more details at the link below.