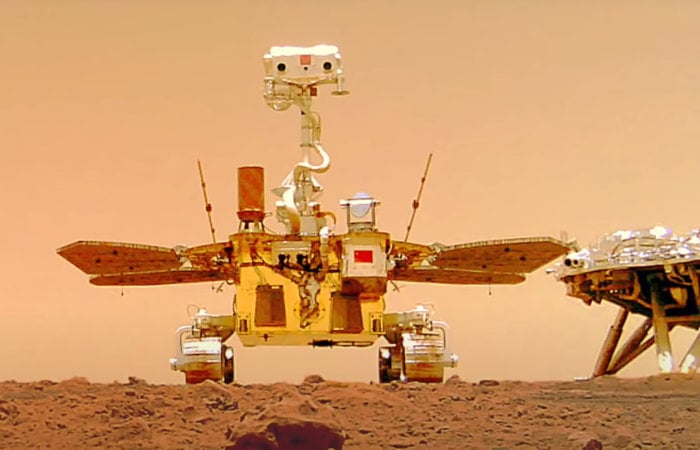 This week new Mars rover pictures and audio have been released for providing a further glimpse at what we can expect from the surface of Mars and its hostile environment. The latest images of Mars have been released by the China National Space Administration (CNSA) and were captured by its Zhurong Mars rover showing the entry, descent and landing including the deployment of the supersonic disk-gap-band parachute, separation of the backshell. As well as the rovers descent, during which it engaged in a hazard-avoidance hover phase and then successfully landed on the surface of Mars.

Since landing on the surface the Chinese Mars rover has covered 236 meters on the Martian surface and captured a number of pictures and interesting audio thanks to remote Wifi camera which was dropped on the surface of Mars by the rover, allowing it to take selfies and the surrounding landscape of Mars. Jia Yang, deputy chief designer of Tianwen-1 Mars rover explains :

“Zhurong Rover is more independent in its driving on Mars [compared with China’s Yutu lunar rovers]. It can judge by itself whether there is a path ahead based on its image analysis. It will make a judgment about every one meter in its driving, and move towards the target set by the ground.” – “The rover is part of the Tianwen-1 mission, China’s first independent interplanetary mission. Consisting of an orbiter, a lander, and a rover, Tianwen-1 launched in July 2020. It entered Mars orbit February 10th 2020. Zhurong is equipped with six science payloads, including a laser-induced breakdown spectroscopy instrument for analysing surface elements and minerals, panoramic and multispectral imagers, a climate station, magnetometer and a ground-penetrating radar.” Check out the latest Mars images and audio in the video below.