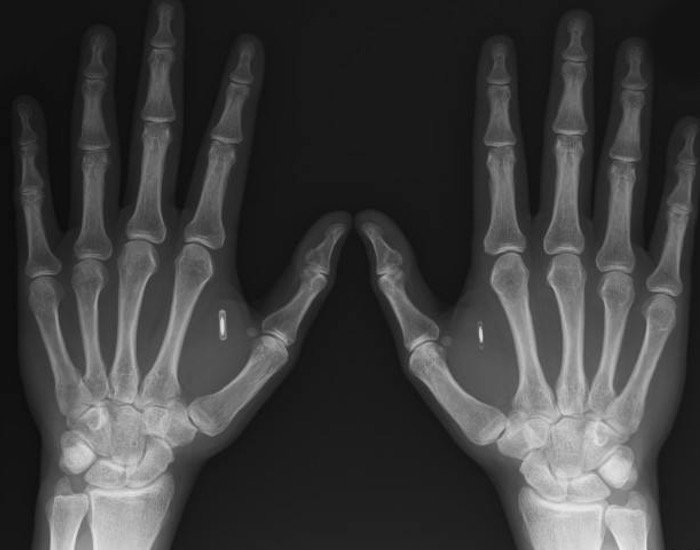 Martijn Wismeijer, a Dutch entrepreneur has undergone a medical procedure to implant NFC chips into his hands to help him safely store his Bitcoin wallet and always have the availability to access it when required.

As you can see from the image above just between his thumb and forefinger are the NFC chips that will store his Bitcoin information and enable him to access it using Near Field Communication (NFC) technology. Watch the video after the jump to learn more.

The NFC chips take the form of the NFC Type 2 compliant NTAG216 RFID chipset and are stored in capsules measuring 2 x 12 millimetres in size. Each chip can store 880 bytes and were apartness purchased online within a preloaded syringe for around $99.

“The xM1 is an ISO/IEC 14443-A Mifare S50 1K RFID chipset encased in a 2x12mm cylindrical USP grade lead-free borosilicate biocompatible glass housing. The xM1 can be read and written to by many types of 13.56MHz RFID systems.

While not truly an NFC compliant tag type, the xM1 does have limited NFC compatibility with certain NFC enabled Android devices such as the Samsung Nexus S, Samsung Galaxy Nexus, the Nexus 7, the HTC Amaze, etc. as well as Windows Phone powered devices such as the Nokia Lumia 920. It has 1KB memory and supports Crypto-1 encryption.”

For more information on the new NFC chips jump over to the Dangerous Things website for more details.

“MrBitcoin gets his first NFC implants installed during a biohacking session in the basement of the old Prodent Toothpaste factory organized by Permanent Beta. These NFC tags can be used for a variety of purposes but at MrBitco.in we like to see them as subdermal Bitcoin Wallets that enables one to securely store digital cash under one’s skin.”