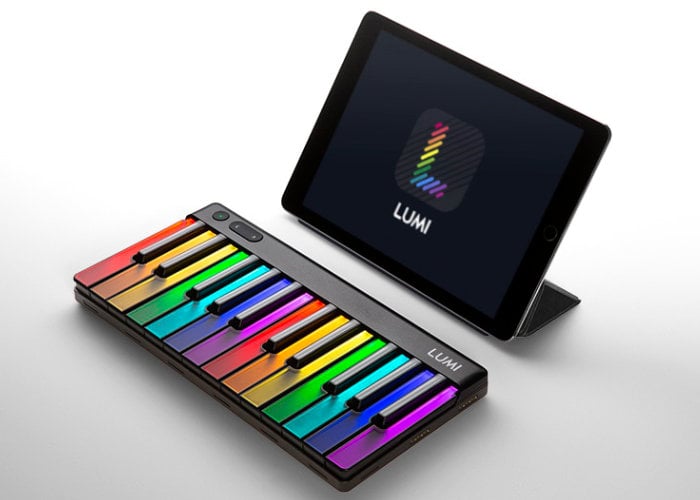 If you are interested in learning to play music on a keyboard, you might be interested in a new system called LUMI developed by a team based in London and this week launched via Kickstarter. Thanks to over 2600 backers and with still 29 days remaining on the campaign the team have raised nearly £500,000 smashing their required pledge goal of just 100,000. Watch the demonstration video below to learn more about the illuminated keyboard created to provide users with a smarter way to learn and play music.

Earlybird pledges are available from £117 offering a 40% saving off the recommended retail price. If all goes to plan worldwide shipping is expected to take place during October 2019. The miniature keyboard can be combined with another to produce a longer keyboard if desired. “Snap two or more LUMI Keys together to instantly expand your keyboard. ROLI’s patented magnetic connectors and an edge-to-edge design come together to make LUMI Keys the world’s first fully expandable keyboard. “

“Playing a musical instrument is one of the great joys of life. Only problem is, it takes years of practice. That’s why a lot of people don’t learn, even though they love music. But we’ve figured out a new, smarter way to learn and play. LUMI lets everyone play and jam along to hit songs. You’ll be more musical in minutes — and amazed at how quickly you progress!“

“Compact and lightweight, LUMI Keys can travel anywhere. At just 600g it weighs less than an iPad Pro. It’s smaller than almost all laptops, so it fits easily in bags and backpacks. When you’re taking LUMI on the go, you can protect the keyboard in style with a custom-made Snapcase. “