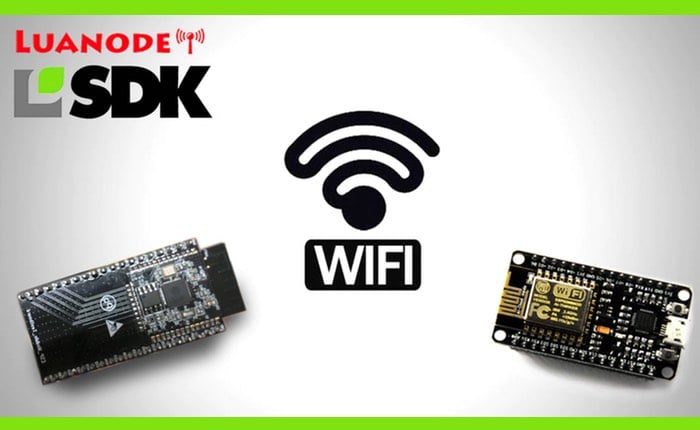 Electronics enthusiasts looking for a new way to create Internet of Things projects may be interested in a couple of new development boards which have been created by Jimmy Wu based in Shenzhen.

The Luanode For ESP8266 and ESP32 is a WiFi enabled System On a Chip (SoC), provided by Espressif, for Internet of Things (IoT). its developer explains more about the inspiration design and functionality of the new Luanode.

We want to make Lua run on the ESP32 Wi-Fi chip, as well as ESP8266, which is the most integrated solution for Wi-Fi applications in the industry. Lua gives you the benefits of a well-known high-level programming language – simple and powerful code, and rapid development – all in the constraints of a microcontroller. Using Lua on the ESP32 will allow you to create beautiful Internet of Things (IoT) devices with ease, much quicker than with C or similar compiled languages.

With extras modules we provided, which are written by C and required by Lua directly, will help developer to develop faster. For instance, the module named gpio will provide methods to operate device IO pins, the developer doesn’t need to understand the detail of how to read/write pins, they only need to require the module and then invoke the methods. What’s more, this Kickstarter campaign is different from the exist software-only project, we provide not only source code but also hardware for backers to speedup development. We believe that the powerful language, modules, hardware and app samples we provided will make it easier to create great IoT application than ever before!

For more information on the new Luanode jump over to the Kickstarter website for details by following the link below. If you are interested in creating Internet of Things projects or require a smart home hub you might be interested in our home automation hubs and system guide.