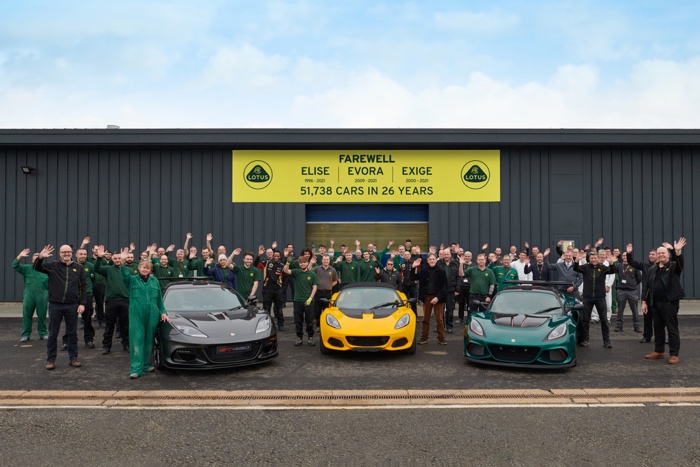 The new Lotus Emira is coming next year and now Lotus has announced that they are ending production Lotus Elise, Exige and Evora,

The photos above show the last car of the Lotus Elise, Lotus Exige and the Lotus Evora that have been made, a total of 51,738 of these cars have been produced

The trio were photographed on site with many of the Lotus team who contributed to the design, engineering, assembly and sales of the cars.

Between these three model lines and over the course of 26 years, a total of 51,738 cars will have come off the production line. Combined, they represent almost half of the total production of Lotus in its 73-year history. In addition, 9,715 sports cars were built for Lotus’ third-party clients, including GM and Tesla.

From 1996 to 2000, the first-generation Elise and Exige sports cars were built in a small assembly hall at Hethel alongside the Lotus Esprit. The current assembly lines, which were installed in 2000, will be dismantled and replaced with all-new state-of-the-art facilities in support of the all-new Emira factory. Full Emira production begins in the spring, after the prototype and test phases currently underway are completed, taking Lotus sports car production into an exciting, high-tech and semi-automated era, and increasing capacity up to 5,000 units per year on a single shift pattern.

You can find out more details about Lotus and their final vehicles of their Elise, Exige and Evora over at Lotus at the link below.