LG will be announcing a number of new devices at Mobile World Congress later this month, they have been teasing a new series of smartphones, but we are also expecting to see some next generation models of existing devices.

It would appear that LG will be releasing new versions of their Optimus L series devices as details have been leaked on the new LG Optimus L3 II, the Optimus L5 II and the Optimus L7 II. 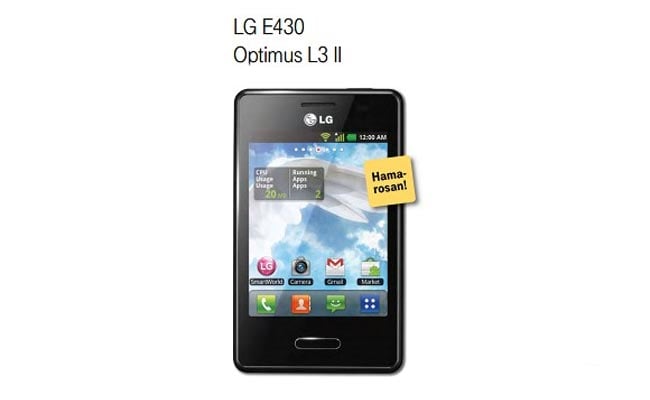 According to the leaked information, the LG Optimus L3 II, pictured above, will come with a 1GHz processor and an improved IPS display, the display will be a 4 inch screen with a WVGA resolution and the handset will come with Android 4.1.2 Jelly Bean.

The LG Optimus L5 II will come with a Cortex A9 processor clocked at 1GHz and will feature a PowerVR SGZ531 GPU, plus a 4 inch WVGA display and Android 4.1.2 Jelly Bean.

The LG Optimus L7 II will feature a Qualcomm Snapdragon MSM8225 dual core processor and an Adreno 203 GPU, plus a 4.3 inch WVGA display and an 8 megaixel camera, the device will also come with 768MB of RAM and Android 4.1.2 Jelly Bean.

We should have more details on these new Android smartphones from LG later this month, we wonder if this is the new series of smartphones LG has been teasing or if we will actually see some new devices rather than some updated models of last years handsets.