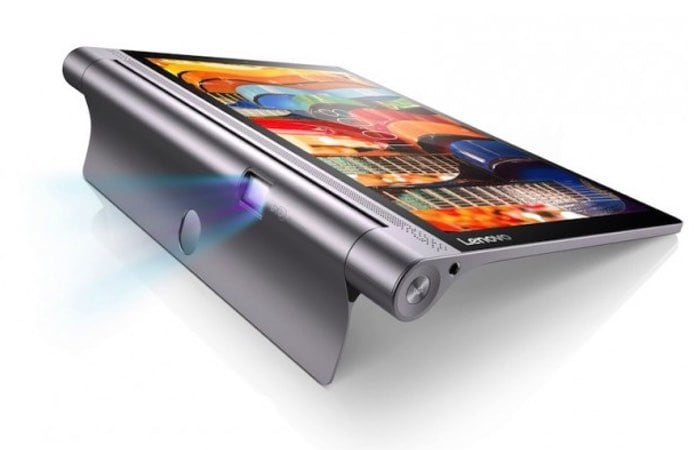 At the IFA 2015 taking place in Berlin this week, Lenovo has unveiled a range of new hardware that includes a new 10 inch tablet that is equipped with an integrated projector together with four front facing speakers.

As well as being equipped with a projector the Yoga Tab 3 Pro will be launching in November priced at €299 and is powered by an Intel Atom x5-8500 Cherry Trail processor supported by 2GB of RAM together with 32 GB of internal storage.

The 10.1 inch display on the Yoga Tab 3 Pro provides users with a resolution of 2560 x 1600 pixels and comes preloaded with Google’s latest Android 5.1 Lollipop operating system. As well as a micro SD card and connectivity provided by GPS, Bluetooth 4.0 and wireless connectivity via support for 802.11b/g/n.

If you have no need for an integrated projector Lenovo has also created two smaller tablets equipped with an 8 inch display and larger 10 inch that will be launching next month priced from $169 or €199 powered by an 1.3 GHz quad-core Qualcomm APQ8009 processor supported by 1GB of RAM, and 16GB of storage with some of the same features as the larger Pro version, and also a 4G LTE option for $50 more.