Mobile World Congress 2014 is about to kick off, and several OEMs have already announced new products ahead of the event.

Recently, Lenovo unveiled it’s latest Yoga 10 HD+ tablet, which is the successor of the Yoga tablet unveiled a few months back. The new Lenovo Yoga 10 HD+ brings several hardware improvements at the table, including an improved design, a sharp display and a faster processor. 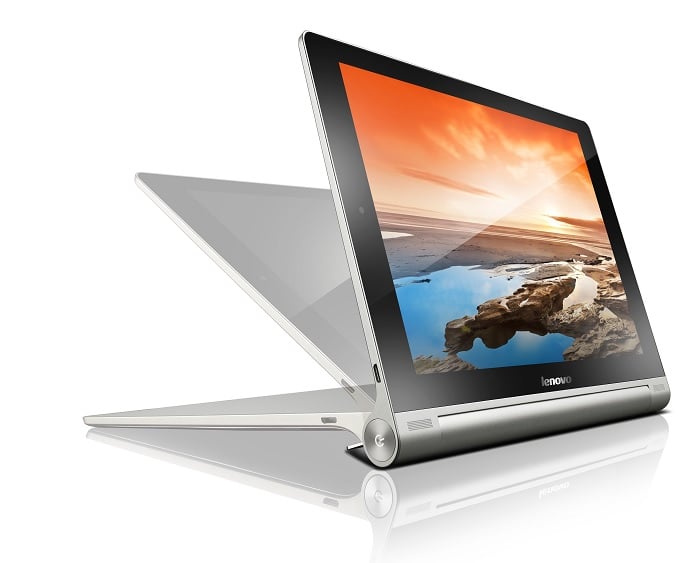 PC+ leader Lenovo today at the 2014 Mobile World Congress announced the new YOGA Tablet 10 HD+, a multimode Android device that takes Lenovo’s original Yoga Tablet to new heights with a premium mobile experience. The YOGA Tablet 10 HD+ refines the tablet’s unique design with Hold, Tilt and Stand Modes by infusing it with the latest technologies including a Full HD screen, Qualcomm® Snapdragon™ processor and sharp high resolution camera while maintaining its incredible up to 18 hours of battery life1.

Lenovo Yoga 10 HD+ comes with a 10.1-inch Full HD display sporting a resolution of 1920 x 1200 pixels with multitouch & 178 degrees IPS wide viewing angle. The  tablet is powered by a quad-core Snapdragon 400 chipset with a clock speed of 1.6GHz and 2GB of RAM on board.

On the storage side, the tablet comes with 16/32GB storage with an option to expand it via microSD card of up to 64GB. Other features include dual front-facing speakers with Dolby Audio, 8MP rear camera for photos and videos, 1.6MP front-facing camera, a massive 9,000 mAh battery that can provide a battery time of up to 18 hours and run Android 4.3 Jelly Bean pre-installed out of the box.

The tablet will hit the shelves in April and will be available for  $349 from major retailers as well as from Lenovo’s website.