We have heard about a number of Apple patents before that could see the ability to buy tickets come to iOS devices, and now a new one has been discovered which could mean that we will be able to but movie tickets direct from our iPhone in the future.

Patently Apple have discovered a new patent that was published yesterday by the US Patent & Trademark Office, that shows how you would be able to buy movie tickets with your iPhone, and it also seems to feature some sort of integration with iTunes Music trailers, and also the iPhone’s calendar. 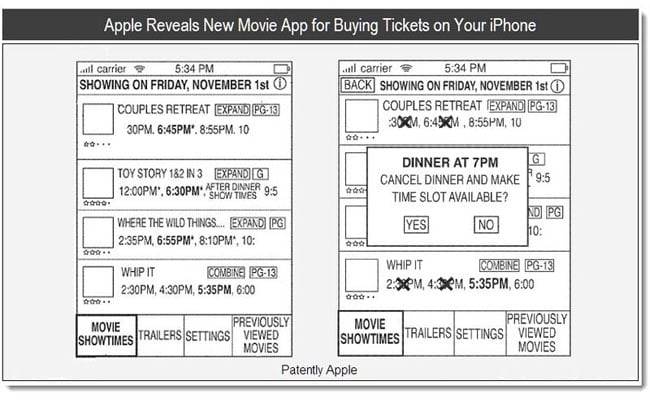 Apple’s patent basically covers systems and methods relating to generating context-based movie information. A future iOS device may include a movie application that could obtain show times of one or more movie theaters. For example, the iOS device could obtain the show times from a data source (e.g., a server).

What is interesting from the patent picture above shows the calendar integration, it gives the impression that if you were trying to buy a movie ticket for a certain time on a certain day, that they App would check with your iPhone’s calendar before the ticket to see if you have any prior engagements.

You can find out full details of everything that was found in the latest Apple patent filing over at Patently Apple.