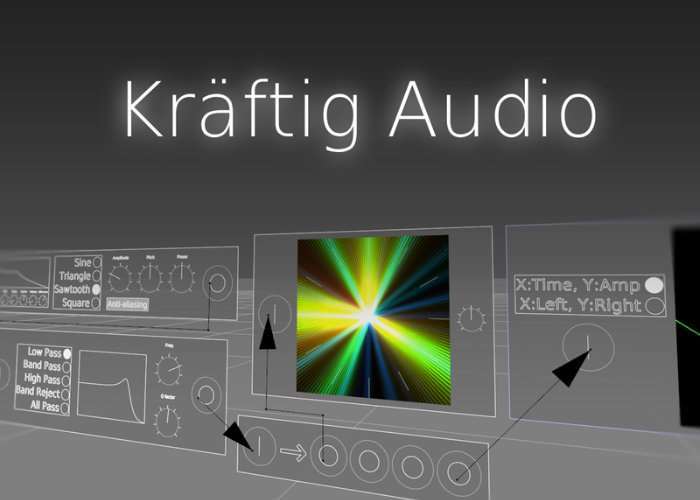 Samuel Johnson has taken to Kickstarter this month to launch a new virtual reality audio workstation which allows you to create music in VR from scratch using synthesisers, effects, sequences and more.

Watch the demonstration video below to learn more about the Kraftig Audio VR audio application which is hoping to raise $50,000 over the next month to make the jump into production.

A ton of other devices and features are planned, including:

Kräftig is a German word and musical term meaning powerful, vigorous, or strong. Kräftig Audio is a new kind of digital audio workstation—or DAW—which combines the power and modularity of professional audio equipment with the immersion and creativity of a 3D game. With Kräftig, you can create a variety of devices—such as synthesizers, filters, and scopes—and connect them together with virtual wires.

Kräftig will support whatever MIDI or audio devices you already own, and allow you to make completely new sounds using them. You can plug in any electronic instrument, like microphones, electric guitars, or MIDI keyboards, and groove in Kräftig! Don’t own any hardware? No problem! Kräftig provides sequencers and virtual keyboards, allowing you to write and play entire songs with nothing but a laptop.

Kräftig comes with several devices for monitoring and testing audio. See the waveform of audio with the oscilloscope, or its frequency spectrum with the spectrogram. Analyze the harmonic qualities of sounds using the chromatic star—a brand new kind of audio visualization which lets you see the pitch and timber of notes in real time!