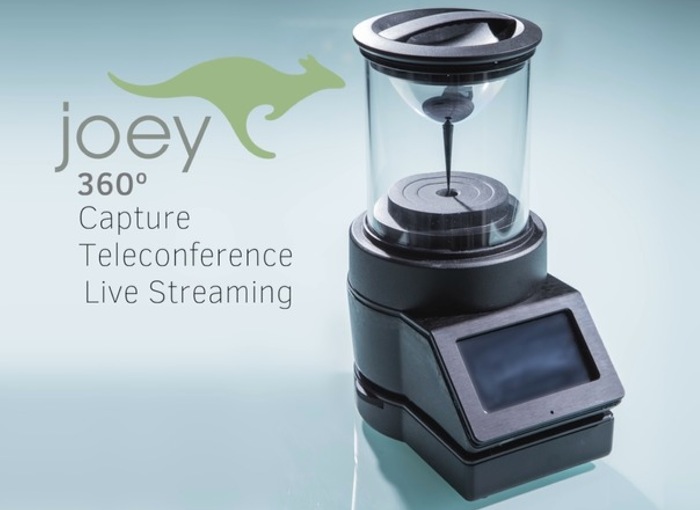 Jeff Glasse based in New York has created a new 4K Ultra HD camera called the Joey 360 desktop camera that is capable of capturing full motion 360 degree video for a live webacast or two-way panoramic teleconferencing.

The Joey 360 has been under development for the last 2.5 years and is now ready to take to market if Jeff can raise the $40,000 he requires via his Kickstarter crowd funding campaign.

The Joey 360 camera is built around the Snapdragon 800 quad core processor, together with an integrated 13 megapixel sensor capturing footage at a resolution of 3840 x 720 pixels at 30fps. The Joey 360 is also fitted with a 4 inch display allowing you to see the footage in real time. Watch the video below to learn more about the Joey 360 project and see it in action. Jeff explains a little more :

“Joey integrates seamlessly into our online panoramic video ecosystem at kogeto.com, allowing users to instantly share 360º video with friends and colleagues, or easily integrate them into their own website, social media feed, content management system or evaluation system, free from the seams and color irregularities which plague multi-cam panoramic solutions.

Using our panoramic player for iOS or Android, you can develop your own 360º applications using the unprecedented quality that Joey provides.”

The Joey 360 project is currently looking to raise $40,000 in pledges to make the jump from concept to production. So if you think its something you or tour business could benefit from, visit the Kickstarter website now to make a pledge.