If you have snug fitting earphones that drown out any noise from your surrounding environment this is normally a great feature.

But if you are at work for instance and my near to hear a little of what is happening around you. Say your boss shouting instruction at you. Then this new iPhone Awareness App might be for you. See a demo after the jump. 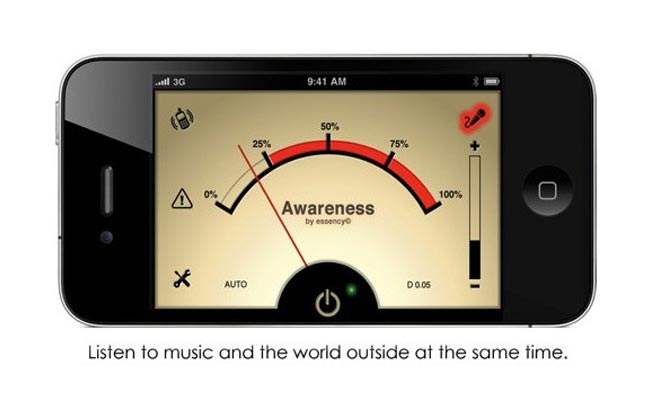 The app automatically calibrates its threshold upon startup to only alert you of sounds when they are above the average level of your current location.

Example: if you run the app while you’re on the subway, it will acclimate itself to the rumble of the train, only relaying sound from your mic when it picks up louder noises, like the conductor announcing the next stop.

You can also set the threshold manually, as well as increase the level of the mic’s input. If your headphones don’t have a built-in microphone, Awareness can use your iPhone’s microphone, but you’ll need to keep your iPhone out of your pocket so it can pick up sounds.

Awareness! is available for $5 from the iTunes App Store and will soon be available on the iPad, Android, Symbian, and even the Mac and PC.