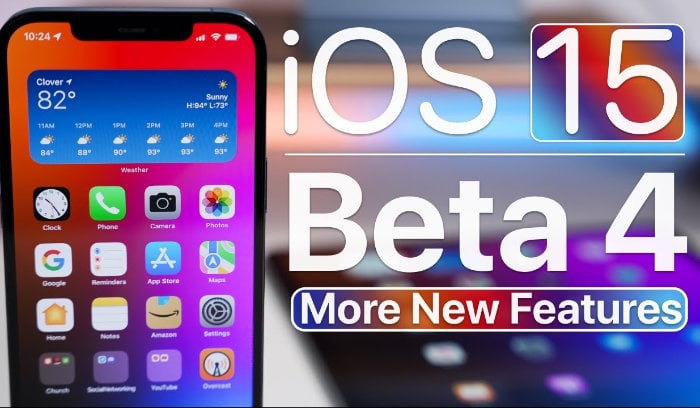 Apple released its new iOS 15 Beta 4 last week and following on from the previous videos released by YouTuber Zollotech new features not included in the previous overviews have now been revealed and demonstrated. Providing a great insight into what you can expect from the new Apple iOS 15 mobile operating system which will be officially launching later this year when the iPhone 13 is released.

IOS 15 includes a wealth of new features for Apple users to enjoy including a new Focus mode designed to enable users to concentrate on the more important applications and notifications on their phone at certain times of the day. Apple will also be running out major new privacy improvements in iOS 15 expanding on their already implemented privacy controls allowing users to stop applications tracking them. Another new feature coming with iOS 15 is SharePlay, created to enable you to watch movies and TV shows with friends over FaceTime as well as more updates, features and tweaks to existing Apple applications such as Maps, Safari, Email and more.

“The latest iOS has quite a few features that were missing in my initial video about what was new. After more investigating and some help from you I show you more new iOS 15 features and changes that were released with Beta 4. In this video I compare iOS 14 Beta 3 and iOS Beta 4 using iPhone 12 Pro Max, iPhone 12 Pro, and 2020 iPad Pro 12.9″

For more information on the upcoming Apple iOS and the new iOS operating system currently still under development by Apple and will be rolling out to the latest iPhones and iPads later this year check out the extended iOS 15 beta 4 overview video.