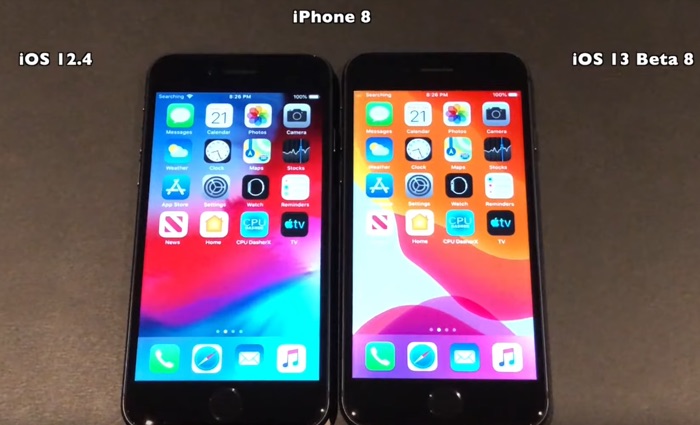 Apple has released their new iOS 13 beta 8 software to developers and also to public beta testers, we are getting very close to the final version of iOS 13 which is expected to land next month.

Now we have a speed test video of iOS 13 beta 8 and we get to find out if this new beta is any faster than the current release of iOS 12.4. On the video below we get to see the latest beta run on the iPhone 6S, iPhone 7 and iPhone 8.

As we can see from the video the iPhone 6S booted up slightly faster on the new beta than the handset running iOS 12.4. There are no speed improvements in the standard apps but there are some in third party apps.

The iPhone 7 running the new iOS 13 beta 8 booted up quicker than the handset running the iOS 12.4 software, there were also some speed improvements in some third party apps.

In the last test with the iPhone 8 the handset running iOS 12.4 booted up faster, there were some speed improvements in some apps.

Apple will be releasing their new iOS 13 beta 8 software next month, we are expecting it to land some time after Apple’s iPhone 11 press event, this is rumored to take place on the 10th of September. As soon as we get more details on the release date we will let you guys know.