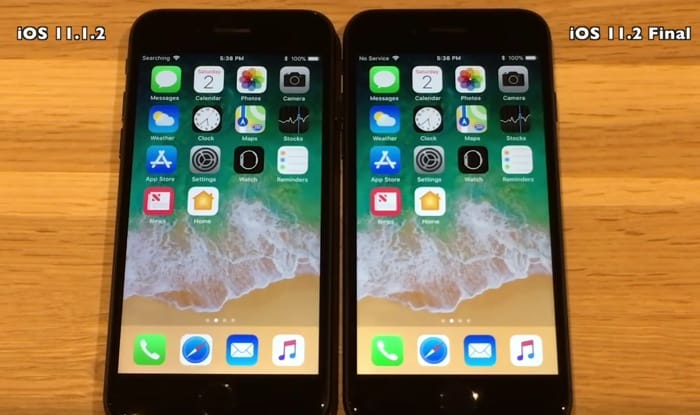 The new iOS 11.2 software update was released on the weekend. We saw a number of videos of the betas of the OS being tested against the previous versions of the software. Now we have some new videos which shows iOS 11.2 vs iOS 11.1.2.

As we can see from the video the newer iOS 11.2 boost up quicker on the iPhone 5S, it also appears to be faster in the apps. Next up is the two versions of iOS running on the iPhone 6.

The new iOS 11.2 also appears to be faster on the iPhone 6, the handset boots up quicker with the new OS. Next up is the iPhone 6S.

On the iPhone 6S the older iOS 11.1.2 appears to be quicker at booting up. The older OS also appears to be slightly faster in the apps. The next handset is Apple’s iPhone 7.

As we can see from the video the older OS booted up slightly faster on the iPhone 7. The older OS and the new one appear to be about the same in the Apps. The latest version of Apple’s iOS is now available to download as an OTA update for the iPhone and iPad.