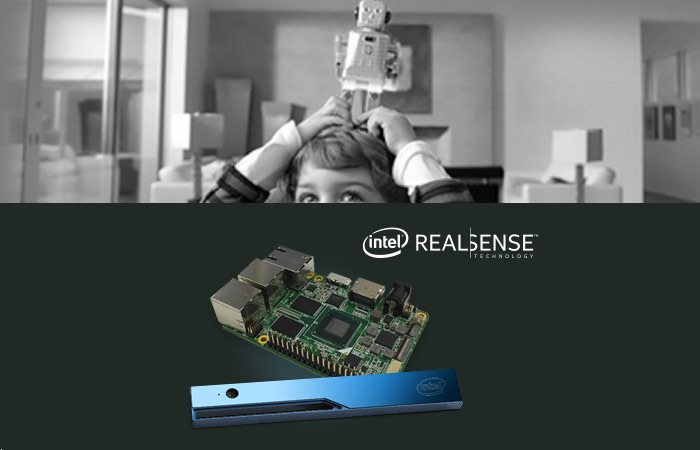 Intel has this week unveiled and released a new addition to their range of Intel RealSense packages with the launch of the Intel RealSense Robotic Development Kit, that has been specifically put together to provide a way for those interested to build drones, robots and other semi-autonomous projects using the Intel RealSense camera.

The Intel RealSense Robotic Kit includes both a camera and an mini PC which looks similar to the Raspberry Pi and provides processing power via a Atom x5-Z8350 processor, Intel HD graphics and 4GB of DDR3L-1600 RAM with 32GB eMMC of internal storage.

The Intel Robotic Development Kit RealSense Camera (R200) is capable of detecting motion up to 4 meters away and is also capable of capturing infrared/depth imagery at VGA resolutions at a maximum of 60 frames per second and 1080p RGB imagery at 30fps. The Intel mini PC Is also available to purchase separately priced at $89. Intel explains more about the new Intel RealSense Robotic Development Kit which is now available to purchase price to $250.

The robotic board has a 40-pin general purpose bus that lets makers create their own interface boards. In addition, there are more interfaces available, such as a USB 2.0 port on connectors and header, a USB 3.0 OTG, full-speed gigabit Ethernet port, an Embedded DisplayPort (eDP), a camera interface (CSI), an HDMI video output, an I2S audio port, and a real-time-clock (RTC).

The robotic board ships with support for Ubuntu. In addition, many other operating systems (including Microsoft Windows® 10 and various Linux versions) are possible, with support through the developer community.

For more information on the Intel RealSense Robotic Development Kit and to pre-order yours, jump over to the official Intel website and Developer Zone by the link below.