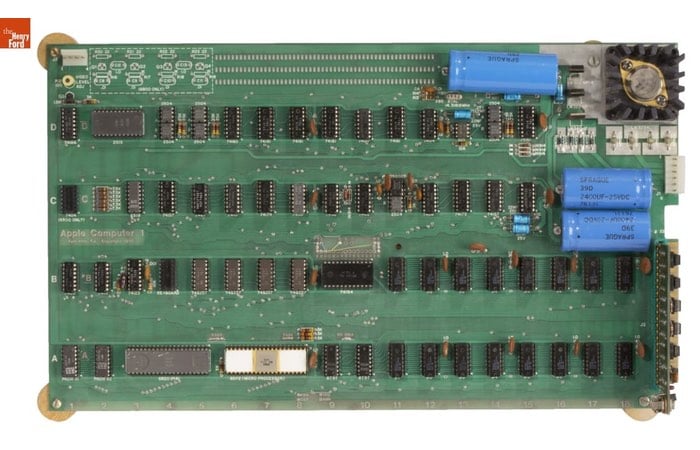 If you live in or are thinking of visiting the Detroit area and would like to view one of the very first Apple 1 computers ever created, one of the first batch of 40-year-old PCs will be available to view at The Henry Ford Museum in Detroit.

The iconic Apple 1 computer is owned by The Henry Ford Museum and will be on display until the end of this month, April 30th so if you have always wanted to gaze upon the chips on the very first Apple 1 PC don’t delay.

Facts and numbers about the Apple 1 computer include :

– Apple Computer, Inc. was founded on April Fool’s Day: April 1, 1976.
– On naming the business, Steve Jobs said: “Apple took the edge off the word ‘computer.’ Plus, it would get us ahead of Atari in the phone book.”
– This Apple 1 is one of the first 50 ever made, sold directly through the early computer retailer, The Byte Shop.
– Paul Terrell, owner of The Byte Shop, saw Wozniak’s demonstration of the Apple 1 at a Homebrew Club meeting, and placed the first wholesale order.
– When you purchased an Apple 1, you were purchasing the motherboard.
– Peripherals like a keyboard, monitor, power supply, tape drive were bought separately.
– Approximately 200 Apple 1’s were sold in total; the location of approximately 46 of these original units is known today.
– Only 9 of the original batch of 50 Apple 1’s are documented as being in working condition.
– The Henry Ford’s Apple 1 is completely unmodified, with all of its original chips. It is fully operational.

On April 11th, 1976—40 years ago—the first Apple product made its public debut. The origins of this device began the previous year, on a rainy day in March of 1975, when a group of enthusiastic computer hobbyists met in a garage in Menlo Park, California. Steve Wozniak attended this inaugural meeting of the Homebrew Computer Club, and walked away with the inspiration to create a new breed of computer. This was the beginning of the Apple 1 computer.