Earlier this week, the prolific Twitter leaker @evleaks revealed some specifications of the upcoming flagship device from Huawei, the Ascend P7.

He did mention the upcoming flagship device will look quite similar to its predecessor, and now we have some leaked images of the device, which shows the alleged Huawei Ascend P7, posing in all its glory. 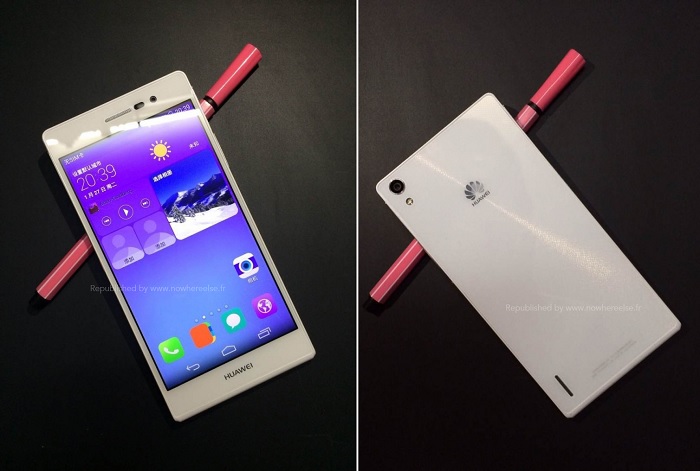 The images surfaced from a French blog NoWhereElse, who have a decent track record of leaking images of unreleased handsets. The leaked photos show the handset from every possible angle, and one thing can be concluded by looking at the photos: it looks similar to its predecessor.However, the software does look a little different when compared to the one found inside the Huawei Ascend P6.

Here are some more images of the device:

As for the specifications, rumors suggests it will rock a 5-inch display sporting a resolution of 1920 x 1080 pixels, and is powered by a .8GHz quad-core Kirin 910T processor. Other features include 2GB of RAM, 16GB storage with a microSD card slot, 13MP camera on the back for photos and videos, 2MP front-facing camera, a 2,500 mAh battery and runs Android 4.4 KitKat with Emotions UI.

Huawei will unveil its latest flagship device at a press event in Paris on May 7th. There’s no word about the pricing, but we’re wildly guessing it will come with a similar price tag as its predecessor. We’ll update you as soon as the handset gets official.